Lead the Change, be the Change: World Skate and FISR pushing together for gender equality 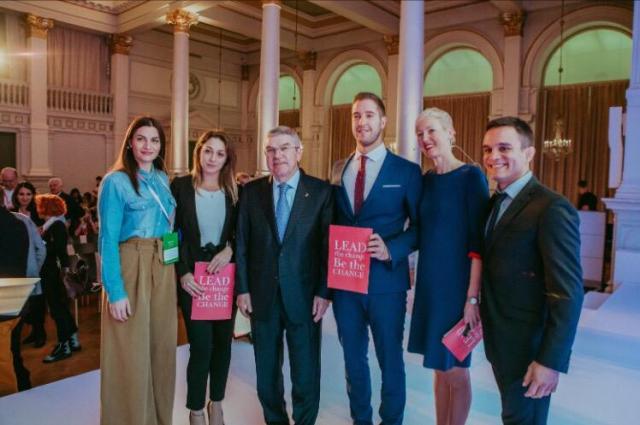 The New Leaders Sport Leadership Programme is a legacy project of Ms. Birgitta Kervinen, World Winner 2017 IOC Women and Sport Awards, who decided to use the award for advancing women’s leadership in sport in Europe. The New Leaders Programme and its Forum are joint efforts of the International Olympic Committee, the European Olympic Committees and the Olympic Committees of Finland, Ireland, Lithuania and Azerbaijan.The Programme three workshops – that took place in Vilnius, Dublin and Baku – and its closing Forum – held in Helsinki – aimed at educating 30 participants to become Game-Changers. Throughout 2019, concrete action plans have been designed to implement the IOC Gender Equality Recommendations into action as well as to take gender equality, good governance and responsibility to the next level, thus creating a culture of change in Europe. As a result, the Programme Game-Changers – young sport leaders coming from 26 different European countries and representing a variety of different sports - have successfully led the change under the guidance and support of their mentors, through the implementation of a number of development cooperation projects and initiatives focusing on women’s empowerment and leadership in sport.

“One of the main takeaways from the programme for me was the acquisition of key skills to state my case and convince others. If you are the right person for leading a group, you must speak up and take your place as leader. Skateboarding has become an Olympic sport and will be part of the upcoming Tokyo 2020 Olympic Games. However, over the years, no Skateboarding female judge and coach has officiated at major international competitions. This was the reason that prompted me and my project mentor, Maria Grazia di Valerio, World Skate Development and Education Officer, to act in favour of a change and push for the organization of the first ever Skateboarding International Technical Course for female judges and coaches that took place in Rome, last May ” said Daniele Facchinetti, New Leaders participant from the Federazione Italiana Sport Rotellistici (FISR).

The organization of the first ever Skateboarding International Technical Course for top-level female judges and coaches was supported by the IOC Olympic Solidarity, the Italian National Olympic Committee, World Skate and FISR. The seminar took place in Rome, from 14 to 18 May 2019, under the guidance of two World Skate technical experts, Martin Karas and Alexis Jauzion, both very active in the promotion of gender equality in Skateboarding development.

Overall, 12 women coming from 8 different nations, including emerging countries, were given the opportunity to train, share best practices and lessons learnt, while building enduring valuable networks, in order to increase the female quota into an environment that has traditionally been male-dominated, and push for gender equality through strengthened cooperation in light of the IOC gender equality recommendations on the road to Tokyo 2020.Since May 2019, the percentage of women officiating at major Skateboarding international events has considerably increased: at the Barcelona WRG2019 and the Rio de Janeiro OI Stu Open 2019, the female participation rate has risen from 0% to 16,7%; at the European Skateboarding Championships in Russia from 0% to 20%; at the International Skateboarding Open in China, from 0% to 33,3%; and at the first ANOC World Beach Games recently held in Qatar it has reached 50%. “World Skate is committed to keep on embracing the IOC recommendations in gender equality through a number of projects we aim to implement already in 2020, including the WSLA HP programme. We are already exploring the opportunities being offered by this initiative entirely focused on the development of female leadership skills in sport, in collaboration with other IFs and the IOC Olympic Solidarity” said Maria Grazia Di Valerio, World Skate, in her closing remarks. Some of the most felt appreciations came from Ms. Sarah Keane, Chair of the EOC Gender Equality Commission and Mr. Thomas Bach, IOC President, who personally congratulated World Skate and FISR for the outstanding results being achieved and encouraged the International Federation to keep on being ambitious and actively engaged in making equality a new norm in the field of sports.