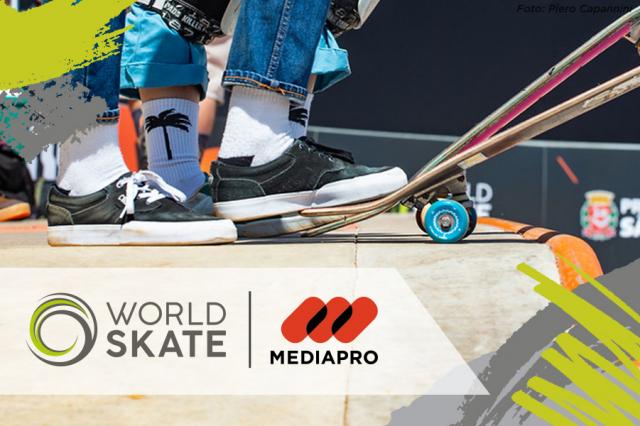 World Skate and the MEDIAPRO Group sign agreement to implement, develop and market the international events of the eleven sporting disciplines under the federation’s brief.

World Skate and the MEDIAPRO Group, a leading company in the audiovisual sector and unique in its integration of audiovisual content, production and distribution, have signed a new alliance for the implementation, development and marketing of World Skate sporting events internationally for the next four years.

With this agreement, both World Skate and the MEDIAPRO Group agree to join forces and work together in the expansion, dissemination and international positioning of the competitions organized by the Federation, with the aim of attracting younger audiences associated with disciplines such as scooter or skateboard, which is to feature as Olympic sport at the Tokyo 2020 Games.

“This is a very important year for our Federation and we are very excited to have signed a new international agreement with Mediapro. They have a significant global reach and will help us ensure that our major competitions are available to fans globally. ”said World Skate President Sabatino Aracu.

Eugeni Sallent, MEDIAPRO Group’s Director, expressed his satisfaction with the agreement saying: “We are very proud of the trust that World Skate has placed in us. The Group's experience in organizing and creating audiovisual events and managing sports rights will be key to projecting the value of its competitions”.

About MEDIAPRO
With a fleet of more than 90 Outside Broabcast units, the MEDIAPRO Group produces more than 12,000 events around the world each year. The Group currently participates in the production of 14 national soccer competitions around the world, including the national leagues in Spain, Portugal, Italy, Greece, Belgium, Canada, Chile, Mexico, Colombia, Bolivia, United Arab Emirates, Turkey, Kenya and Angola. It has also produced events for the UEFA Champions League, the FIFA World Cup, the FIFA Confederations Cup, the African Nations Cup, FIBA ​​events, the EuroLeague and Formula 1. The MEDIAPRO Group was also the host broadcaster of the 2019 Pan American Games in Lima Peru and responsible for the production of the CONMEBOL Copa Libertadores and the Copa Sudamericana. MEDIAPRO is the official international agency for LaLiga and Concacaf rights. In early 2019, the group signed a long-term agreement with Canadian Soccer Business to exploit the worldwide television rights of the Canadian Premier League, the country's new soccer league. MEDIAPRO produces more than 15 television channels around the world, including several sports themed networks. With 58 offices on four continents, MEDIAPRO is one of the world's leading content creators, with projects for HBO, Netflix, Amazon Prime Video, Turner, DirecTV, Movistar, FOX, Viacom and Televisa.