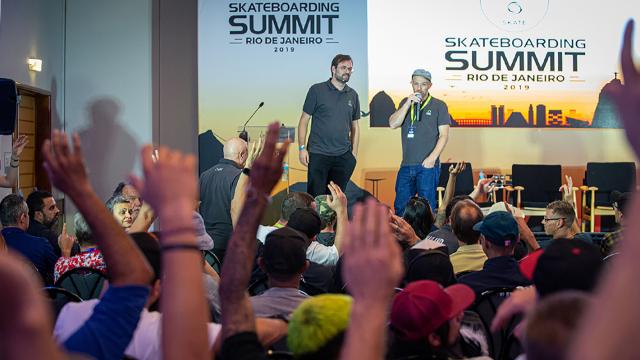 Skateboarding
Skateboarding
13 November 2019
World Skate: the first Skateboarding Summit is a wrap!This past weekend World Skate had the opportunity of hosting its first institutional and technical global meeting for all skateboarding stakeholders heading into the 2020 Olympics. It was an important and fruitful meeting for all in attendance. We have an amazingly diverse, dedicated, and passionate community of people who truly care about skateboarding and skateboarders. The informational presentations and conversations from World Skate staff, National Federations, and the skateboarders themselves were invaluable and informative for all. The meeting got off to a great start with opening messages from hosting NGB President Eduardo Musa, World Skate president Sabatino Aracu and World Skate Chairman Gary Ream. Sabatino Aracu, welcomed the people in the room: "This is a historical moment for all those who really care about skateboarders and skateboarding: here we have the most important stakeholders - skateboarders, judges, team managers, NGBs, industry representatives - and they are sitting all together for a constructive debate about key points such as gender equality, judging and athletes' safety. All the people attending the Summit will have the chance to make their voices heard for the very first time."From there it went straight into introducing our newly elected rider reps. In attendance were Amelia Brodka, Ben Hatchell and Manny Santiago. All of which channeled valuable rider opinion and insight through out the meeting. Natalia Sanchez brought us an excellent and well received presentation on gender equality in skateboarding. Touching on equal prize money, equal scoring and mixed panel judging. Highlighting that at the World Beach Games in Doha we had more women on the judging panel than men for the first time. Leading into the summit, several days were spent meeting to work on the International Skateboarding Judging Commission (ISJC) report. Martin Karas gave a presentation on this and beyond serious details such as consistency, the pathway to judging certification, and a judging code of conduct, we’re all excited for his new key lime attire as suggested by Manny Santiago. Along with Martin Karas, and Alexis Jauzion and Luca Basilico from World Skate, judges present to work on this report were Kelly Hart, Matt Milligan, Kyle Berard, Vanessa Torres, from the Usa, Kristina Westad from Norway, Lincoln Ueda, Renata Paschini and Marcos Hiroshi from Brazil, Renton Millar from Australia, and as rider representatives Manny Santiago and Ben Hatchell.Subcommissions on vert skating, downhill and slalom were given by Renton Miller and Luca Basilica. Making great cases for all, in particular Renton Miller’s discussion on vert and how hopefully we’ve all stopped using the vert button by now.Midday we had the great honor of having Rachael Spry from the International Olympic Committee and Simone Masserini give their helpful insights into Tokyo 2020 and the road to Paris. Rachel’s presentation on the Olympic movement, skateboarding’s involvement in the Olympics and particularly athlete support were particularly great. As all of us look to support skateboarders, our athletes, through this olympic process, everyone should go check out the Olympic resources at https://www.olympic.org/athlete365/. As the project leader for Tokyo, Simone was able to share helpful info regarding the event site and Olympic village. Keep an eye out for more details as we get closer to Tokyo.
Juergen Horrwarth and Eric Kirkwood gave informative and sometimes emotional presentations on coaching. Both obviously deeply love skateboarding and the people they work with. Explaining that coaching is really just an extension of what we’ve all already been doing as a culture. Whether its as a friends trying to figure out back tails on a ledge together or explaining score to one of their athletes at an event, it's really about being there for the people you care about and supporting them in their journey at the Olympics.One of the hot topics of the day was use of helmets in competitive skateboarding. Shiran Habekost led the discussion and presented data on head injuries in competition and valuable information on concussions. WIth many voices in the room, ranging from both the younger and older generations of competitive skateboarders, many were on the side of helmets, especially as it related to park skating. Further discussion is warranted and valued, all competitors on this journey should contact rider representatives with input. The qualification system for 2020 was presented by Luca Basilico. Including revealing schedule dates and seeding changes.A discussion on protecting our young athletes from both the possible physical and mental strains of the competitive environment was hosted by Shiran Habekost. While the discussion on this will continue, many valuable points of view were expressed by those in attendance.As we grow closer to Tokyo 2020, World Skate will continue to represent our community of skateboarding with the integrity and respect that so many of us have for it. The most important thing in all of this is our skateboarders; their voice, their opportunity for fair competition, and their well being. We welcome and encourage every stakeholder to continue these discussions by reaching out and look forward to keeping these discussion going through our rider reps or any communication channel.Sabatino Aracu's conclusions: "I'm so proud of this first edition of the Skateboarding Summit as we had the opportunity to gather all of our people and have them talking about their dreams, their doubts and their own points of view. It was a place where people who truly love skateboarding felt free to criticize and to propose. I'm fiercely convinced that a Federation must always be open to criticism and the Summit was the proof that we are on the right path."