A dreamed scenario for the 68th Rink Hockey Nations Cup 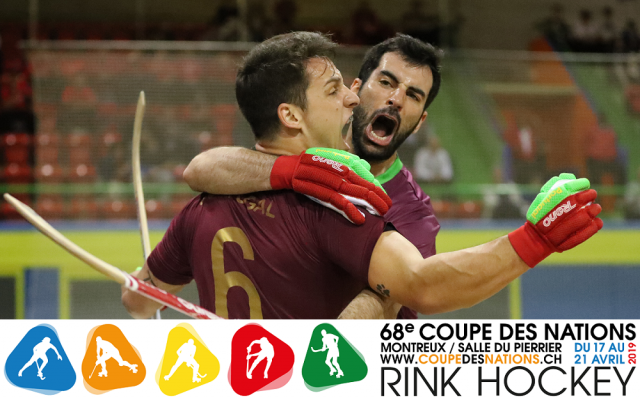 20 matches, 5 days of competition. The elite of rink hockey clashes in Montreux during the Easter weekend. Passion and thrills guaranteed!

The oldest and most prestigious roller hockey competition in the world does not fail in maintaining its reputation. This year again, for its 68th edition, the Nations Cup will gather in Montreux the best teams on the planet. Starting with Spain, reigning world champion, and their rivals, Portugal and Argentina. The competition will be held at Salle Omnisports du Pierrier in Clarens - Montreux from April 17 to 21, 2019.

On the gateway of the World roller hockey Championships, the World Roller Games, which will take place in July in Barcelona, the Nations Cup is an unmissable event. For the invited countries, this is the unique opportunity to confront the rivals, measure strengths and weaknesses of each other. Beautiful game and intensity guaranteed. Especially since the competition will be extremely high. In addition to Spain, Portugal and Argentina, spectators will be able to discover France and its golden generation, Italy, Angola and ... Switzerland. Indeed, the national Swiss team is finally back on the floor of its exploits, where they won a title of vice-champion of the world in 2007!

The Montreux local team, tournament organizer, will have to face the biggest nations of rink hockey. But for the champions of Switzerland, it is the opportunity to confront the elite of their sport. Maybe also to spring a surprise...

To ensure the organization and smooth running of the event, no less than 250 volunteers are mobilized. More than 8000 spectators are expected to attend the tournament. A competition this year will be broadcast live in Portugal. Note that the Nations Cup will celebrate a historic milestone in 2021: the centenary of its birth!