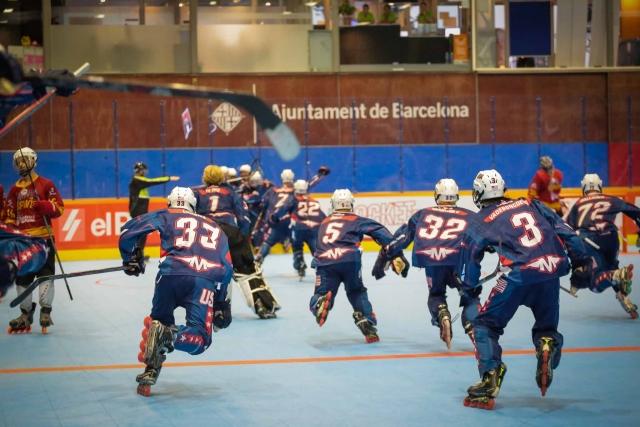 Final day for the juniors: medals are ready to find an owner. Usa play for gold in both the tournaments. Live broadcast on www.rollergames.tv. Check the schedule:

Are the Czechs too strong? Or it wasn't Canada's best day? Maybe the both. First semifinal has been dominated by the Europeans. Balance lasted nine minutes, then the Czechs found a couple of killer tallies with accurate low wrist shots (Luza and Suhrada on the score sheet). It's a break that Canadians didn't recover. Suddendly they went down by 5 goals: Jindra in backhand, Svozil on a rebound and then, after Canada's goalie change, the fifth by Adamec into the five hole. That was it. Canada scored on the power play in the second period (Sutherland) but the momentum didn't change. Adamec and Luze scored again: 7-1 for the Czechs.

What a thrill! Usa – Spain was a game to remember. In front of a packed rink, with loud support from both side, the guys on skates did everything to win. It took the overtime to have a conclusion: Jaden Guzman scored the game winning on a personal play showing pure talent. And frustrating an incredible come-back by the host team. Spain seemed to be out of the game after 20 minutes. They were down by three goals, two of them in the final minute. They conceded another tally in the second (natural hat-trick for Panisa). Down 1-5 they still believed. And shift after shift they built a miracle. The crowd in Mar Bella went mad: four goals in a row for Spain (Gutierrez, Medina, Cabrera, Coronas). Then overtime came, Guzman scored and spanish dream was over.

Spain will defend its title tomorrow. They beat Canada 3-1. Great possession game, but not so cynical near the crease, Spain built the victory on the first goal, scored by Domenech with a wrist shot at third. Canada took some penalties, that Spain didn't convert. Final was a thrill: Spain doubled with Vallejo Castano with less then six minutes left, but Canada responded on a scramble solved by Stoltz. Tension grew on the rink, Canada stayed alive till the spanish empty net goal scored by Diez Meruelo.

Usa will face Spain tomorrow for gold. A possible revenge, after the first phase lost. In the semifinal versus Finland, the Americans controlled the game almost all the time. They just left a few breakaways to Finland. Brown and Josey Dunne opened the score, Klemola answered for the Europeans. Im less than two minutes, Usa took the two-goals lead again, thanks to a tap-in tally by Joy Dunne.