The Big Wheels of Inline Hockey are Rolling Again 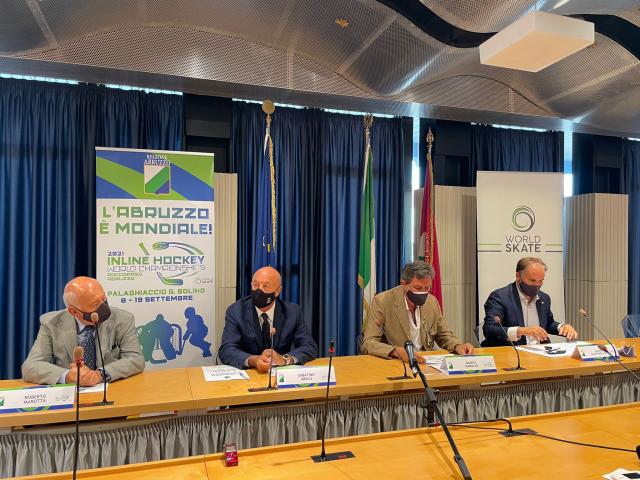 After a long and lonely absence resulting from the lingering effects of the COVID pandemic, the wheels in the machine of inline hockey are turning again at World Skate. With a few days to go before the revival of the World Skate Inline Hockey Championships, The great and the good are gathering in Pescara - Abruzzo, in the heart of Italy. Officials from World Skate, like President Sabatino Aracu and Secreatry General Roberto Marotta, and local officials, such as Marco Marsilio, president of the Abruzzo region, and Guido Quintino Liris, Abruzzo Sport deputy, held today the press conference to introduce the world’s elite inline hockey event, and celebrate a triumphal return to sporting competition for everyone involved.

World Skate President, Sabatino Aracu said: “I would like to thank Italy and the Abruzzo region for the quick response they gave to our organizing proposal. In few days, they agreed to support World Skate in this project once again. In Roccaraso, we will host 26 National teams and we are sure they will appreciate not only the town but the whole region!”

Marco Marsilio, Regione Abruzzo President: “We caught the occasion to host the event as we saw the huge development trend of the World Skate disciplines and these World Championships can be a great opportunity to showcase our beautiful region throughout the world.”

The competition starts on September 8th, beginning with round robin matches for senior women’s teams, representing the very best from 10 nations around the world. This is followed by a knockout playoff format over three days 11th, 12th and 13th September. The senior Men’s competition will be contested by 16 national teams, with 4 groups competing at the top level for a place in the final knockout rounds starting 17th through to the 19th September. Expect to see the finest display of inline hockey from the highest ranked teams such as Canada, Czech Republic, France and Italy, as well as new emerging powers from India, Namibia and Chinese Taipei.

These games take on an extra significance this year. Not only because of the enormous efforts in collaboration between World Skate and the local Abruzzo region, but the added significance of qualification for the World Games next year in Birmingham, USA.

So there is even more at stake to play for at these championships, which means the energy and desire to come and play again is greater than ever. Players, fans, and the local community are very excited to welcome the return of this top level sport to Roccaraso for the third time.

For those who are unable to attend, World Skate are preparing an extra special treat. All games will be broadcast live online, and selected games will be fully featured, with multiple cameras, live commentary, instant replay, interviews, exclusive news and behind the scenes coverage of the event. This will open the games to the world, and showcase the event for everyone to participate in person or at home.

Final preparations are being made right now, and soon the world’s best Inline Hockey players will arrive to represent their countries at the most prestigious inline event on the planet. The press conference being held this morning is just the first little taster, leading up to the start in the next few days. World Skate would like to welcome you all to join us, and celebrate our return to competition.