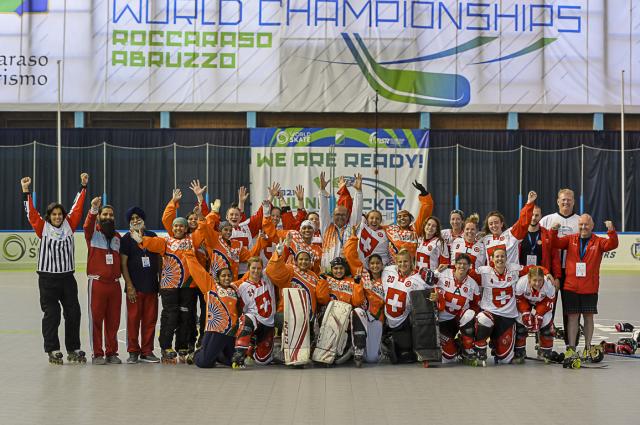 Another beautiful sunny day in Roccaraso, shining a light on some of the outstanding inline hockey talent on offer from around the world, on semi-finals day at the WS IHWCs.

Today playoffs for 5-8th place occur between Italy and Mexico, and Argentina vs Latvia. Following this the deciding matches between the big guns of France, who have so far remained the dominant force in their group, vs Columbia, who saw off Latvia 3-0 to seal their semi-final place. And, of course the game that many could have predicted as a possible final, between USA and Spain. For both of these top-rated sides, this will be their most challenging match yet, and both teams are coming to this semi-final with total confidence and belief. It should really be a spicy match. Expect to see a battle between the wit and wisdom of an organized Spanish team, vs the powerhouse of the perennial winners and current holders of the top prize.

In between these exciting battles in the Palaghiaccio G. Bolino, we also have a ceremonial opening of the games, with a parade through the village, and official opening statements and oaths, to formally declare the spectacular arrival of these miracle games.

A passionate affair between Mexico and Italy as the home side plays for pride of place outside of the top 4. The extra pace, passion and performance of the home team was the ingredient that rewarded the local fans, and all of the Azzurri to a treat they were all hoping for.

Goals from Giannini and Roccella, both 47 seconds into each half demonstrated the Italian philosophy of dominating from the 1st whistle. This was followed in the second half by goals from Dalla Ba 59 and Bisi, which sealed the fate of the Mexicans. No less passionate, the Mexicans battled and defended very well throughout, with Keeper Moreno 73 making several outstanding saves under attack from the rapid Italian shots. Moments of brilliance did appear from Mexico, it what became quite a physical game at times. Both teams did well to only concede 1 penalty, neither of which were capitalized upon. In the end, the skill and pace of the Italians was just overwhelming for the tough and determined Mexicans. But that did not prevent them from celebrating their outstanding efforts, and sharing the joy and respect they have for the game at this world level.