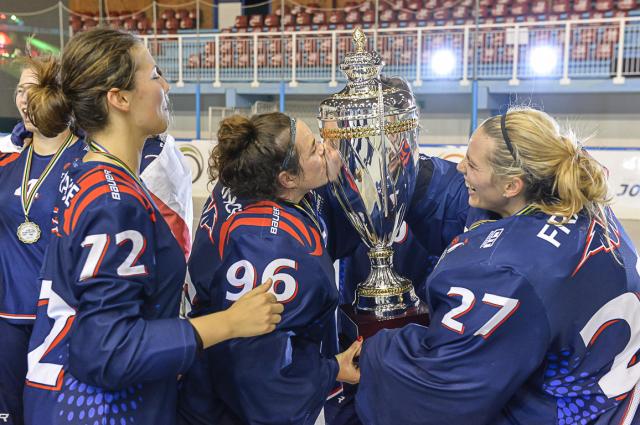 Semi-finals day was a sizzler, when we witnessed the very best of women’s inline hockey both in the rink and around the beautiful host village of Roccaraso.

The first match was the one many expected as a potential final, and both team USA and team Spain full of confidence and belief before the game. It was a close affair throughout, with little to tell between these top ranked sides, though on paper, the American women were the superior. USA started on the back foot early with Megan Myers 15 sitting for holding. They held on bravely, but the momentum seemed to shift in favor of the Spanish, who exhibit control and pace in equal measure. USA called a time out midway through the first half to reconfigure, but another penalty with under 5 mins left from clinch player Kyla Sanders 11 getting caught for tripping. With too much work to do in defending the Spanish powerplay, only moments from coming back to full strength, they conceded to the quick thinking and great hands of Spain’s 41 Ana Paredes. The Americans started the 2nd half brighter, using the break to regain some strength. 90 Camile Corbin taking it physically to the Spanish and challenging their dominance up to that point. In her efforts, she was caught for high sticking, and maybe that was just enough to take the wind out of resurgent American sails.

Several more moments of almost brilliance came and went, but as time ticked away, the Spanish remained in control, and not even pulling the American keeper could unlock the Spanish treasure chest, and so the game result was sealed at 1-0, sending Spain to meet France in the Final, who had yet to play Columbia. Very reluctant to speculate on how this match would conclude, the Spanish head coach said “Whoever wins will be the best team, and we are ready to beat the best”.

Certainly, Columbia went into the Semi as an underdog team, but there is always room for an upset, and when you play with passion and pride like the Columbian women do, then anything was possible. But they came upon a squad that has looked completely dominant in all matches, and this one was no exception. Columbia started the brighter team, and had some moments that forced the French to keep their heads up. But once the French game began to kick in, the difference began to come clear. The first French goal came in 5 mins from 12 Aurore Gautier, from 12 Camille Gandit. This was followed by a masterclass of control, pace and physicality that made it so difficult for Columbia to make an impact. France, in a more conservative mood, patiently waited to 16:43 to score their 2nd of the half, 26 Gandit again displaying her talent. Coming out of the break the Columbians were determined to make a difference, and only 2 goals is not impossible to overcome. But in their passion to make their mark little mistakes could creep in, causing a mixup on the bench and a substitution penalty for 33 Mariana Espitita. Moments of brilliance from Columbian players forced France to defend harder, when they conceded their first penalty for slashing 14 Claudia Mollicchi. But they immediately bounced back and 15 Pauline Bernard potted her goal in the Columbian net. It was then the Columbians turn to throw everything they had, and play all their cards to make a mark on the match. But two penalties from 3 Bustos, and 57 Ramirez for slashing made the difficult task overwhelming. The French did not look invulnerable, but the pace and technical ability in the end was too much for the Columbians, who were hoping against hope to be playing this match at their home games, were it not for the difficulties of COVID. Rance sealed their position in the final in style, and celebrated in style. They are brimming with confidence and are eager to get at it again.
We already knew that the final were going to be an absolute classic.

An epic and emotional final, played with all their hearts and souls on the line was our treat to witness here in Roccaraso, as the two most dominant teams throughout the tournament came together for a classic European rivalry. The Spanish team were seen singing and dancing their way into the arena before the match, and that's precisely how they began, with bright challenges, direct and organized attacks, and comprehensive fore and back checking. The French found themselves chasing and watching this masterclass of technique and training. The talismanic French goaltender Mariane Mousseaux (check spelling) doing more work than she has ever had to in all the previous rounds. Spain, though relentless, could not find a final product. Their momentum only interrupted with a French power play early in the half. But Spain were fortress like in defence and the only other keeper to challenge the mighty Mousseaux for supremacy is (Spanish keeper name/number) who came to this match with a perfect 1.0 record. The French defended well themselves when Spain brought their power play as the first half progressed, but the magnificent Mousseaux was busy earning her award as most valuable goaltender of the tournament. Seeming nothing between the sides, the first half was about to close with no result, except for a moment of sheer brilliance from the incredible 29 Chloe Vuillemin. Her shot from an incredible angle and at full stretch found a tiny gap. Like a bolt of lightening, she stunned both benches and the whole arena with her goal at the death of the half. Returning from the break, France seemed reinvigorated, and began to take more chances and push forward with purpose, finally disrupting the fortifications in the Spanish defence. Under pressure for the first time Spain struggled with their plan, and a penalty 8 minutes in further repressed the opportunity for them to come back, though they did try expertly, which was a pleasure to see for all who witnessed it. In the end it was not quite enough, and they held each other in emotional commiseration as the French celebrated their best ever result at these championships. Both teams, and every athlete who has competed here in Roccaraso can rightly be proud of their achievements, and we all should see the women returning home as ambassadors and heroes.