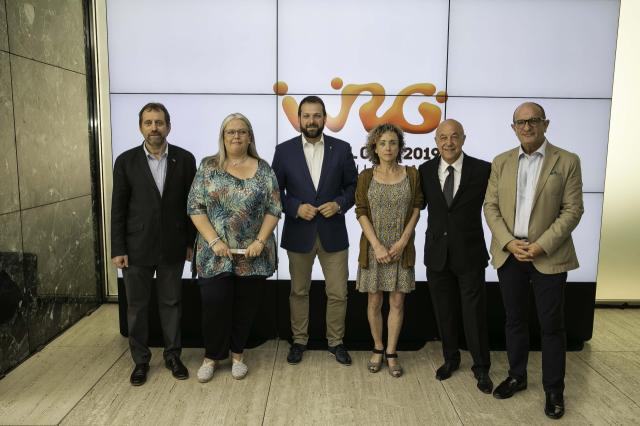 In July 2019, Barcelona will host the world’s biggest skating sports event: 11 World Championships in a single event. One year before the big event, the WRG venues and facilities were officially announced at an institutional event held in Barcelona this morning

In July 2019, the Olympic Ring of Montjuïc will once again become the global hub of sport with the second edition of the World Roller Games, the world’s biggest roller sports event, bringing together more than 4,500 athletes from around the world in Barcelona. It will be a unique showcase of sport, with a total of 11 World Championships in a single event. With one year to go until the big event, the countdown officially began today with an institutional ceremony at which the event’s venues and facilities were officially announced, among other information.

The competition venues were officially announced during the ceremony and the first virtual images of the facilities were shown. The Olympic Ring of Montjuïc will be the main stage for most of the competition schedule, with World Championships to be held in Palau Sant Jordi, Parc Montjuïc, Sant Jordi Club, INEFC and Esplanada. While the CEM Mar Bella and CEM Horta Pavilions and Palau Blaugrana will host the inline hockey and rink hockey competitions, without forgetting that roller sports will also be present in urban venues such as the city’s Front Marítim, Avinguda Reina Maria Cristina and Diagonal-Passeig de Gràcia. The competition subvenues will be the towns of Vilanova, Mollet, Terrassa and Sant Cugat.

Speakers
Marta Carranza, Sports Commissioner of the Barcelona City Council: “It is a great honour and responsibility for us to be part of this event, which confirms the undisputed pairing of Barcelona and sport. A pairing that translates into experience and knowledge. We have the know-how, a passion for sport and also top-class facilities, as well as our streets and the city. This event will once again make Barcelona present in the world and we want to take advantage of this focus to set an example when it comes to applying values that we believe all events should have: sustainability and equality.”

Gerard Figueras, Secretary General of Sport of the Catalan Government: “The World Roller Games are a fantastic opportunity to showcase Catalan sport to the world, as indeed the Olympic Games were in their day. A model of success that we are confident will be replicated a year from now in Barcelona.”

Daniel Laga, Sports Coordinator of the Barcelona Provincial Council: “It is a pleasure for the Barcelona Provincial Council to be involved in an event such as the World Roller Games, which bring added value to the territory. It was important that we as a territory became involved, because its legacy is also the grassroots of these sports disciplines, which provide our young people with more opportunities.”

Sabatino Aracu, President of World Skate: “After the first edition was held in Nanjing, everyone began to ask us about Barcelona, a city with a great image around the world: young, Mediterranean, modern. There is no better city to celebrate the World Roller Games than Barcelona and we hope that this event in 2019 will lead to a major boom for roller sports.”

Carmelo Paniagua, President of the Organising Committee: “This is an extremely important event. A year of hard work awaits us and we will put all our energy into it. The main goal is to ensure that these sports continue to grow. The Spanish Roller Sports Federation and Catalan Roller Sports Federation have travelled hand in hand to organise these World Roller Games. We are going to all join together to ensure its excellence. Today begins the countdown to an event that will mark a turning point in our sports.”

Ramón Basiana, President of the Executive Committee: “Our goal is to consolidate the World Roller Games as a leading world event, just like the FINA World Swimming Championships. Moreover, when we started to consider the WRG at the very beginning, it was clear to us that we wanted the event to be organised in a sustainable manner, to be pioneers in this respect, properly managing our resources.”