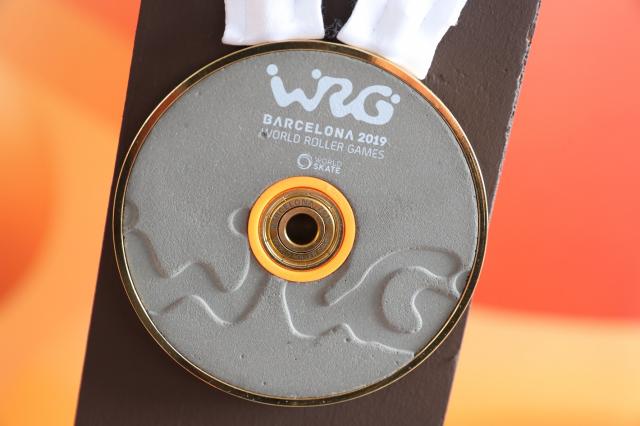 The World Roller Games 2019 now have their own medals. The prizes for which the athletes from more than 100 countries will compete at the Roller and Skateboarding World Championships from June 29 to July 14 were unveiled for the first time at an act in the Real Club de Tennis Barcelona, which is currently hosting the Barcelona Open Banc Sabadell – Conde de Godó Trophy. The medal design is inspired by three concepts that form the essence of the event: the small wheel, the roller sports spirit and Barcelona, all of which alongside values of sustainability and recycling. 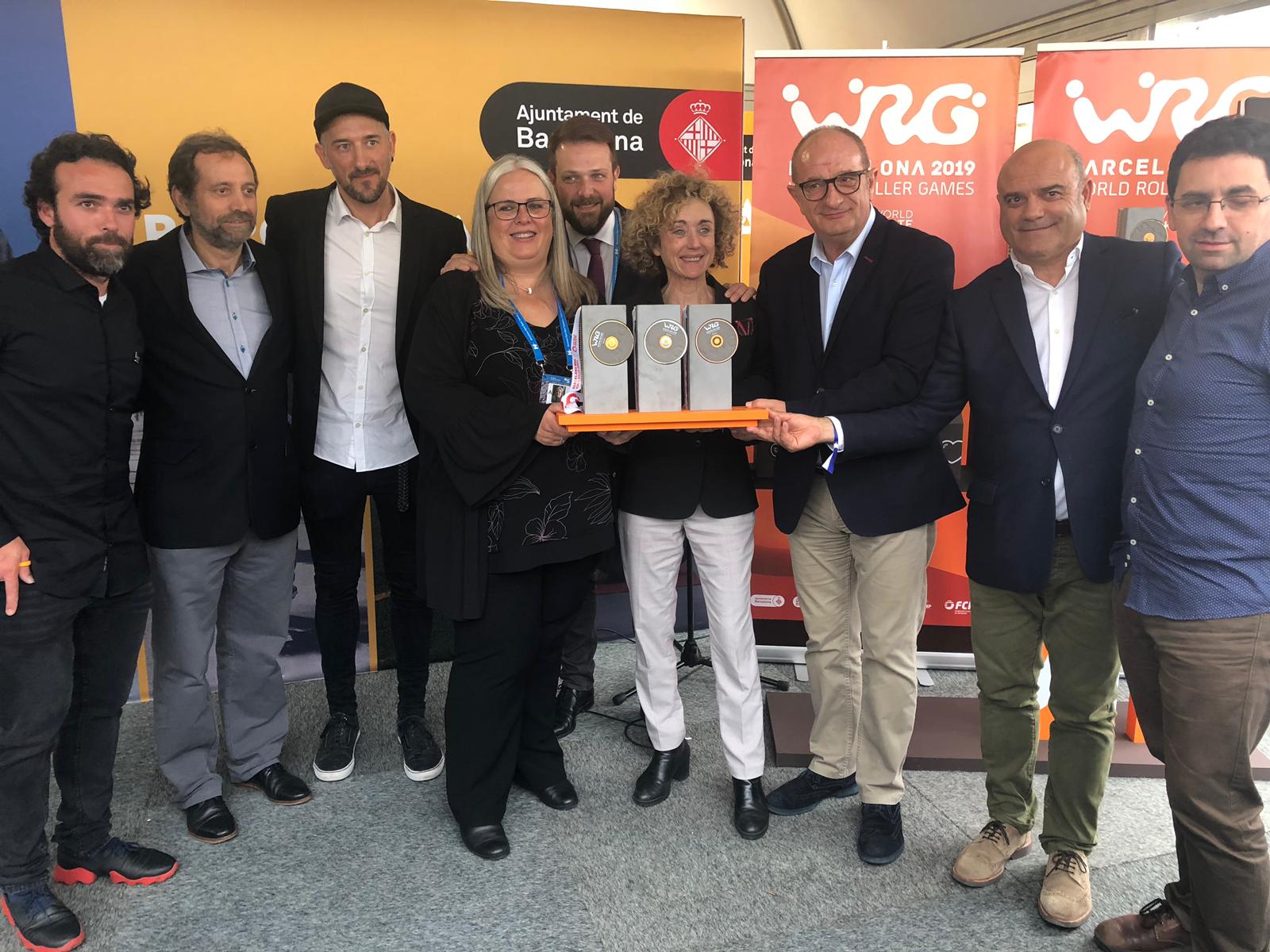 "Barcelona has been an international benchmark in the world of roller skating for a long time and the WRG 2019 will culminate many years of promoting the small wheel in the city," Marta Carranza wanted to highlight during the event. For Carmelo Paniagua, "the World Roller Games are a unique event that will be a turning point for skating and urban sport. This is why we also needed special medals such as these." For his part, Ramon Basiana emphasised that "the nearly one thousand medals to be awarded during the competition indicate the large scale of this event. In addition, 60% of them will be for women in the senior category, thereby demonstrating our support for women’s sport."

A very special medal that functions as three: medal, trophy and jewellery

The medals comprise three independent parts and each has a different look, function and material. They are complementary and fit together to form an attractive and balanced whole. The medals were designed by the Amalgama design studio and local suppliers connected to Barcelona and committed to the environment and local culture were used for their manufacture. Additionally, they were assembled by Fundació Arrels, a social entity in the city that is also involved with these and many other values defended by the WRG.

The three parts making up the Barcelona 2019 medal are as follows:

The small wheel: A single object such as the small wheel represents all the roller sports modalities. A common element in it is essential for its operation: the ball bearing. The metal bearing located in the centre of the medal can be removed so that the winners can wear it as a jewellery pendant or necklace.

Roller values and sustainability: A recycled orange plastic ring surrounds the bearing in the medal. This element represents the values of the roller sports world and the WRG 2019, such as solidarity, equality, integration, team spirit and respect for the environment.

Barcelona: The medals have a concrete body in the shape of a disc that symbolises Barcelona and its urban environment in which most roller sports are practised. With it, the winners will take home a small fragment of the city. This piece, which surrounds the plastic ring and ball bearing, has a bas-relief on both sides and an outer iron crown measuring 95 mm in diameter and 7 mm in width. Both the inner bearing and outer crown of the medal –whose total weight is 250 grams– have a gold, silver or bronze finish to distinguish the first, second and third classified athletes.

As regards the medal’s white cotton ribbon, it has two powerful magnets sewn at the end to connect it to the body of the medal. A highly original technical solution that means the medal can be hung from the neck or function as a trophy without the ribbon when placed on a cement support created for this purpose. 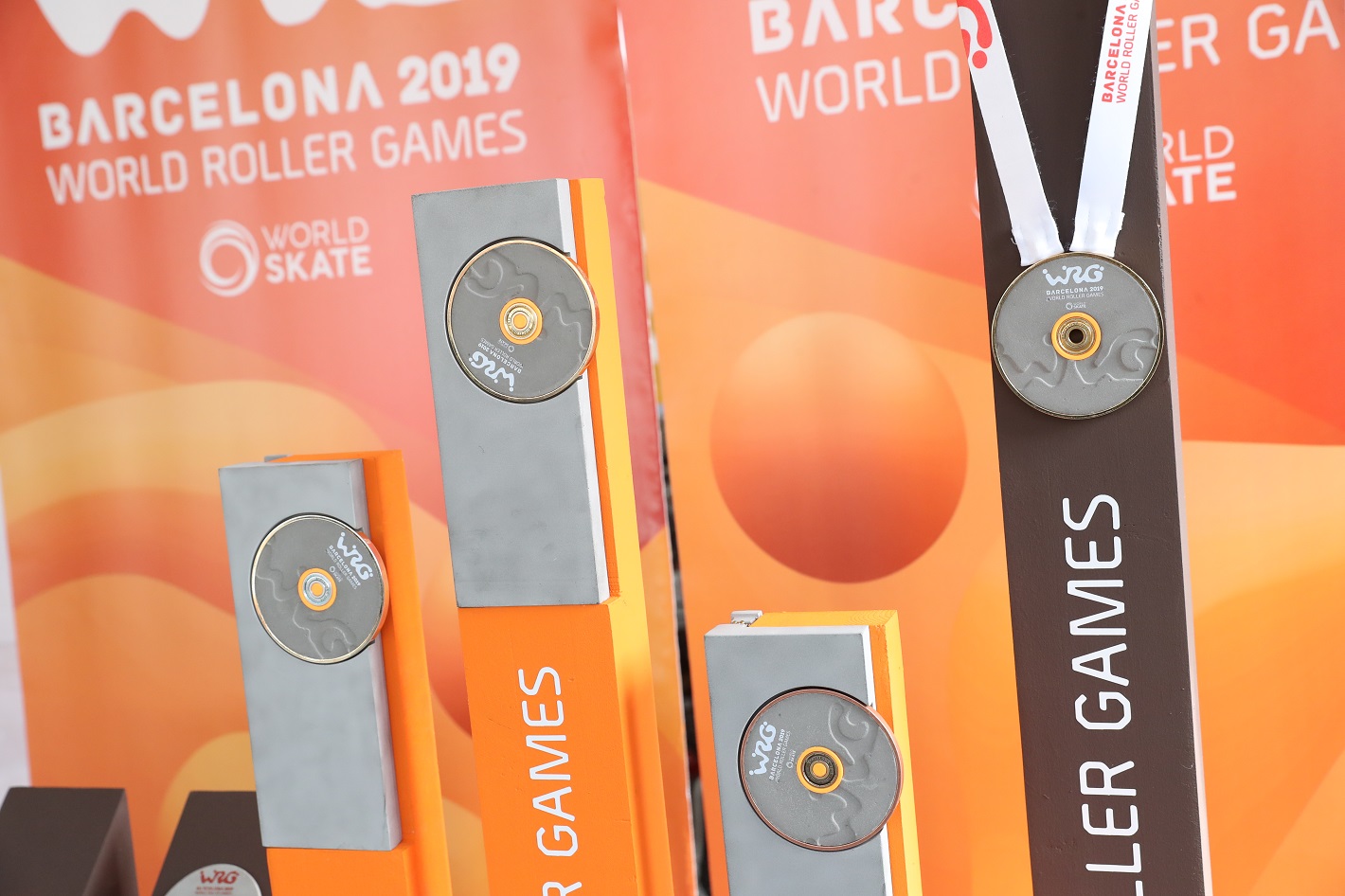