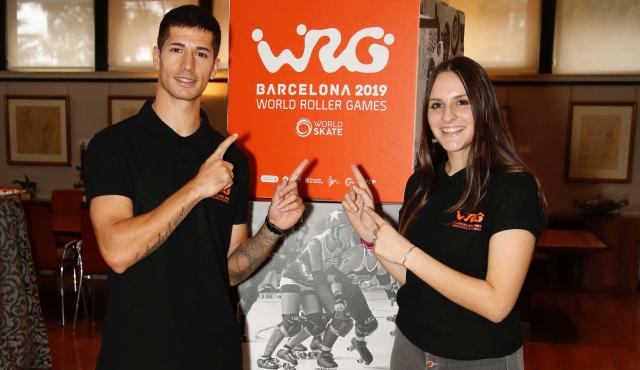 In July 2019, the Olympic Ring of Montjuïc in Barcelona will be an international sport hub thanks to the second edition of the World Roller Games, the world’s largest roller sports event that brings together more than 4,500 athletes worldwide. It will be a unique sporting spectacle, with a total of ten World Championships combined in a single event.

Various virtual images of the event’s facilities were shown during the presentation at the CSD headquarters, an event whose main stage will be the Olympic Ring of Montjuïc and its outstanding venues like the Palau Sant Jordi, Parc Montjuïc or Sant Jordi Club. The competition will also be supported by several subvenues in neighbouring cities and will also be staged in several centres in Barcelona, as well as various urban sites in the Catalan capital, such as the Front Marítim, Avinguda Reina Maria Cristina and Diagonal-Passeig de Gràcia.

Mariano Soriano, Managing Director of Sport for the CSD: “We cannot fail to be involved in an event like this. It will be one of the great events of 2019. I would like to highlight the important joint work of the Spanish and Catalan Federations, the drive of the City Council and also our role as the CSD in strengthening this project. This event is proof that we are stronger if we all work together. The WRG event is an example of progress and modernity. It will be open to citizens in all aspects of urban sports.”

Marta Carranza, Sports Commissioner for the Barcelona City Council: “Barcelona has a great deal of organisational experience and this guarantees that the project will be a success and will further strengthen us as an international sports capital. Alongside its sports aspect, the event will combine the latest trend modalities with others that are more traditional and woven in our association fabric. It has allowed us to work together with major federations, but also with the city’s clubs and entities. And not least of all, it will also leave a major legacy in the city in the form of spaces to practice these sports. It therefore represents a great opportunity for us as a city.”

Carmelo Paniagua, President of the Royal Spanish Roller Sports Federation and President of the WRG Organising Committee: “This WRG event represents a turning point for our sports. We want to make small wheels big by combining the old with the new. It will be a spectacular event in a city that passionately lives these sports. We have world champions in six of the eleven modalities that will be present at the event. The athletes together with Barcelona will truly make small wheels big.”

Laura Vicente, European and world rink hockey champion: “The challenge of playing at home with the backing of all our people is truly very exciting, but it does not guarantee sports success. It implies a certain amount of pressure, but we will work hard. It is an opportunity to understand other disciplines better and to meet up with other roller sports athletes.”

Ioseba Fernández, European and world speed champion: “The Barcelona WRG event is an opportunity to expand the sport. But we can all expand together and discover other disciplines, because it is sad that we barely know each other. I am confident of winning. I am working towards that and do not want to speak with false modesty. Anything can happen later, but I want to win.”