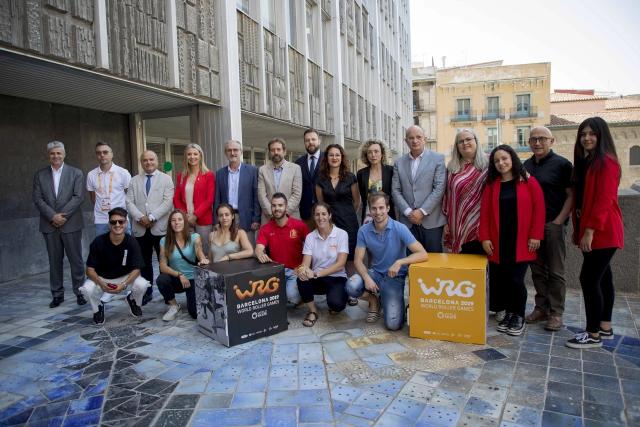 More than 4,000 athletes from 81 countries to compete in 128 sports events to be held in 13 venues spread across Barcelona and 4 other cities. The World Roller Games 2019 have been officially presented in the Barcelona City Council just a few days before the competition kicks off. The world’s most important roller and skateboarding event is set to be held in the Catalan capital from 29 June to 14 July, with Barcelona hosting the world championships of 11 disciplines: Alpine, Artistic, Roller Freestyle, Downhill, Inline Freestyle, Inline Hockey, Rink Hockey, Roller Derby, Scooter, Speed and Skateboarding.

A total of 4,120 athletes from 81 countries will meet in Barcelona to compete in 128 sports events over a period of 11 competition days in the senior category plus another 5 in the junior category. The 750 volunteers all set to collaborate in the organisation similarly give an idea of the magnitude of this major sports event.

For all these reasons, Barcelona will once again be converted into the world sports capital for a few days as it hosts the 11 disciplines of the World Roller Games 2019 across nine venues located across the city. But the Catalan capital is not alone in this organisational challenge, because the event will also have four subvenues: Vilanova i la Geltrú, Terrassa and Sant Cugat, set to host part of the Rink Hockey competition, and Mollet del Vallès, which will host the Roller Derby World Championship.

During the presentation, Laura Pérez, Third Deputy Mayor of Barcelona, stressed: “Barcelona is an international benchmark in action sport and will continue to feature in the world sports calendar thanks to the World Roller Games. One must also highlight the fact that almost half of the participants will be women, a feat that is always difficult in sport, but the WRG also aim to shatter many stereotypes.”

For her part, Marta Carranza,  Sports Commissioner for the Barcelona City Council stated: “Barcelona will be the world small wheel hub, a source of both responsibility and pride. We are constantly working towards leaving a sports legacy behind in the city, as we have done so far with events such as Roda BCN or Extreme and are now doing so with the WRG, after which the installation of a speed track at Front Marítim will be left behind.

“Barcelona is the perfect city to stage this event. We hope to see about 100,000 spectators coming to visit us from around the world, people who can enjoy both the sport and the city. I also want to thank all the institutions that have promoted this event and worked together to make this dream come true,” said Carmelo Paniagua, President of the WRG Organising Committee and RFEP.

Ramon Basiana, President of the WRG Executive Committee and FCP also agreed: “Dialogue, teamwork and excitement have made this great sports event a reality and we hope it will be a success and serve to promote roller sports both within our country and worldwide.”

For her part, Maite Fandos,  Sports Councillor for the Barcelona Provincial Council claimed: "It was important for us at the Provincial Council that the WRG 2019 had an impact not only in Barcelona, but also in other cities, and this is the case of the subvenues of Vilanova i la Geltrú, Terrassa, Sant Cugat and Mollet del Vallès, all of which will make this event even greater.”

“Catalonia is committed to sport in general and skating in particular. The WRG are also an opportunity to win, given that we like to compete here, but they are also an opportunity to show the world that we are good at staging things. Finally, I would like to underline the legacy the WRG will leave behind, because sports events are important for what happens not only during the time they last, but also after,” stated Gerard Figueras, General Secretary of Sport and Physical Activity for the Government of Catalonia.