WSG Argentina: Rink Hockey, Argentina and Spain in the final of the Women World Championship 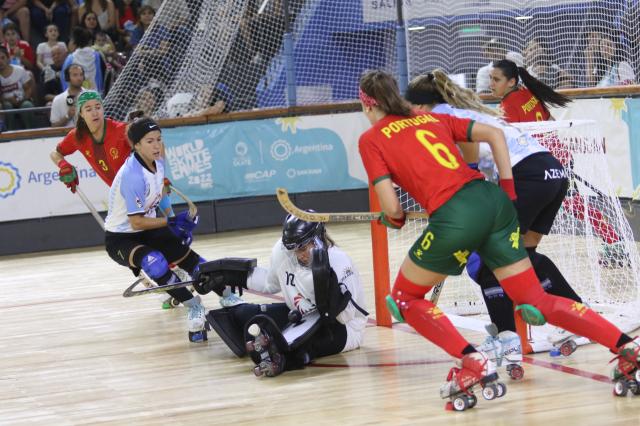 First Spain, then Argentina. The two teams defeated their opponents this afternoon, guaranteeing their place in the final of the competition. Two great games, with four excellent teams, reinsuring that the female hockey is well alive and kicking!

The first semifinal of the day placed Italy and Spain face to face, for the first time at the Aldo Cantoni, with the Spanish winning 1-5 (1-1 at half time), thus going through to the final.

The first 25 minutes were of good quality hockey. Spain displayed a superior offensive power and scored first, by Marta Piquero, at minute 15. Italy focused their game on waiting for its opponents and then playing on the counterattack. And that's how they reached the tie, by Pamela Lapolla, at minute 8.

In the second half Italy raised the lines and put more pressure on the Spanish team who was not intimidated and scored the second, at minute 16. The Squadra Azzurra had a good response to the goal, with some opportunities, but the Spanish goalkeeper was always on her guard and prevented another Italian tie. And as those who don't score, suffer, Spain increased the score, scoring the third, at minute 14, through Berta Busquets.

From that moment on, Italy started to show some physical fatigue, while the reigning world champions kept pressing and, at minute 6, Aina Florenza broke through the opponents' defence and scored the fourth. Three minutes before the end, Mariona Colomer scored the fifth and last goal, with Spain going through to the final where will meet Argentina.

The Italian team will play for the bronze medal against Portugal.

In the second semifinal, Portugal lost against Argentina, by 1-5 (0-2 at half time) and will now fight for the third place in the competition, against Italy.

The match began with Argentina putting more pressure, scoring in the first dangerous move, two minutes into the game, through Julieta Fernández.

Portugal responded well this early goal and, in reply, Sofia Moncóvio shot at the opponent's goal, without success. The Portuguese were quick on the attack and only didn't score due to two factors: bad luck in the finishing and a fantastic performance from the Argentinean goalkeeper, Lucia Flores.

At minute 19, Sofia Moncóvio sent a ball to the crossbar and Portugal narrowly scored. The game was, at this time, intense and divided, but it was Argentina who scored the second, from the penalty spot, at a time when the Portuguese team was closer to tie the game. Portugal once again responded well, insisting on the way to the Argentinean goal, but without finishing, while Argentina continued to apply its pressure. Five minutes from the end of the first half, another penalty was awarded to the host team, who scored the third, setting the 2-0 at half-time.

In the second half, Argentina managed the time, never stopping creating dangerous moves, forcing the Portuguese goalkeeper, Cláudia Vicente, to shine. Portugal managed to score, at minute 13, through Rita Batista, but in the next minute, Argentina scored the fourth. Eight minutes before the end, Portugal was given a blue card. After a first save by the Vicente, the Argentineans scored on the rebound, closing the score at 5-1.

The first two matches of the day took place at the UPCN Stadium, to define the classifications from 8th to 5th place. France defeated Germany 3-1 (1-1 at half-time) and will play tomorrow, against Chile in the race for the 5th place tomorrow, while Germany will discuss the 7th place with Colombia, who lost with Chile, 7-0 (0-4 at half-time).

As for the Intercontinental Championship, Switzerland thrashed the Australian team by 16-0 (0-0 at half-time) and is in first place, with 15 points, while Brazil beat Mexico 1-17 (0-14 at half-time).