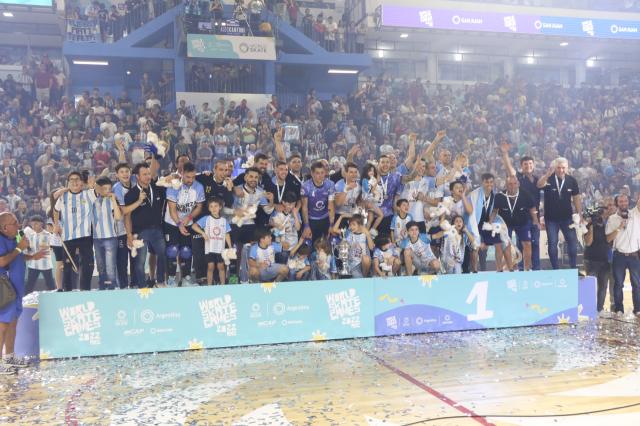 This was a night of glory for the Argentine national team, at home and in front of an audience of eight thousand people, who sold out the Aldo Cantoni.

Argentina was crowned the Rink Hockey World Champion, after defeating Portugal, 2-4 (2-1 at half-time).

The first minutes of the game were quite intense, with Portugal exchanging the ball wisely, with long pass attempts. The first shot of the game came from Gonçalo Alves, who shot to the defence of Conti Acevedo. With the game's pace in their favour, the Portuguese scored early, at minute 23, through Henrique Magalhães.

The match continued with a slight ascendancy of Portugal, who was defending firmly and cutting off the long-distance shots of the Argentineans. After a period of some Portuguese pressure, it was Argentina's turn to press more, giving the Portuguese goalkeeper some work.

Portugal kept their cool in the transitions and, at minute 9, Henrique Magalhães scored the second, after a good collective action. With just over a minute to go in the first half, Argentina reduced the score, through Pablo Alvarez, sending the teams to the breaktime with a 2-1 score.

In the second half, both teams began with determination when, with six minutes on the clock, Portugal saw the blue card and Carlos Nicolía tied the game, scoring the direct shot.

From that moment on, Argentina stepped up the pressure, with the game becoming more intense and physically tougher. With 11 minutes to go, a loss of possession by the Portuguese in the central zone led to Argentina's third goal, again scored by Alvarez.

The goal allowed the Argentineans to start playing with the clock, while Portugal had to chase the loss, rising its lines, with its sights set on the opponent's goal, but failing to score.

With a minute and a half to go, the game became frantic: Portugal risked everything, with Garrido taking off Girão to play the final stretch with five field players. But Argentina managed to recover a ball and Ezequiel Mena scored the fourth and final goal, which gave Argentina their sixth World Championship title.

Portugal fought until the end but lacked some luck on several occasions and leaves this World Championship with a world-class performance.

France and Italy decided the game on penalties, after finishing the regular time tied at five goals, with France winning the game and achieving a historic third place, reaching the podium for the first time in a rink hockey world championship.

In the first minutes, we watched a fluid game, with Italy having more control on the rink, while France waited for the counterattack. Gradually the game gained more intensity, with both teams centralising their attacks in the last quarter of the rink and went to the breaktime tied 2-2.

The second half continued with the same trend. Italy took the lead, but with just six seconds remaining, and just when it looked like Italy was taking home the bronze as they were winning 4-5, France tied the match again. In the extra time, the tie persisted, although both teams stepped up their attacks, with both defences irrepressible, taking the decision to the penalty shootout, where France was more effective, scoring three and Italy two.

Spain finished in fifth place - its worst World Championship appearance in 31 years - after beating Angola 8-0 (4-0 at half-time). The Spanish were on their game, pressing from the start, making quick transitions, and trying the mid-range shot, while Angola slowed down, to find space for the final incursion or the long-range shot.

The match started with a fast Spanish goal, just after 62 seconds by Ferrán Font. True to their way of playing, the Spanish continued to look to add to their tally and seven minutes later, at minute 8, Pau Bargalló scored the 2-0. Angola began looking for the tie, but after missing to score a penalty shot, in the following play, Ignacio Alabart scored the third, at minute 17. A few seconds before the end of the first half, Nil Roca scored the fourth and closed the first half with a 4-0 lead.

In the second half, the Spanish dominance was recurrent, but the fifth goal only happened, at minute 15, by David Torres. Angola was unable to score, while the Spanish team scored more three goals, closing the match at 8-0.

In the race for seventh place, Chile beat Germany 2-4 (0-1 at half-time). It was a balanced game, with the teams playing more openly, with a slight dominance on the rink from Chile, with Joaquin Fernandez scoring the first goal at minute 6.

During the second half, the Chilean team increased the score with three more goals. Germany still managed to score two goals, at the last minute, but it was no longer possible to turn the result around, with Chile taking 7th place in the final classification and Germany eighth.

Colombia is the champion of the Intercontinental Championship, after defeated Mozambique 7-4 in the final.

With this result, Colombia gets a place for South America to compete in the next Men World Championship.

Andorra beat 3-2 Switzerland and finished in 3rd place. It was an even match between the two teams, where there were practically no differences in terms of playing. Andorra scored twice through Nil Dilmé and once through Arnaú Dilmé. Kilian Pascal scored twice for Switzerland.

Brazil qualified in fifth place, after beating Austria, 2-5. It was a great game for the Brazilians, with ball possession, mainly through its players Diego Dias (scorer of two goals). As for Austria, there was little it could do in the face of Brazil's all-over-the-pitch attack. The Austrians attacked at times but were ineffective at scoring chances.

The Israeli team defeated Australia, with a goal scored by Richter, and finished the competition in seventh place.