WSG Argentina: Inline Freestyle, Last day of the Worlds is for the Battle Slalom competitions 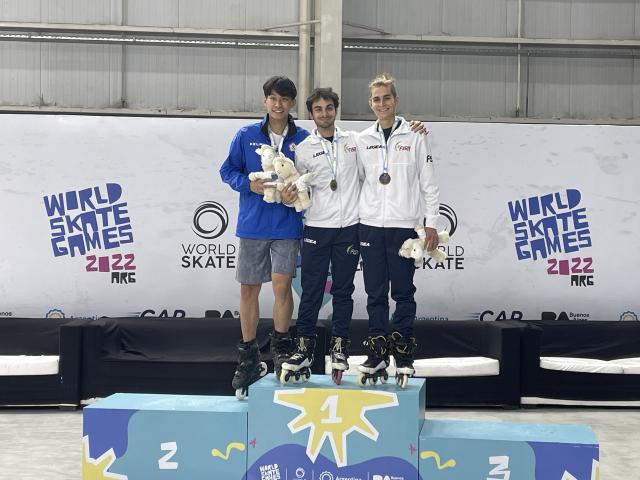 Last day of the Inline Freestyle Worlds means time for the last competitions: Freestyle Battle Slalom. Another race like the classic slalom where the contestants have 30 second to impress the judges while running between four rows of cones. At 9am the stage belonged to the 19 junior women and after the quite intense quarter finals the podium has been all for those who already won the Classic Freestyle Slalom long, though with an Italian winning the gold medal.

Same for the 8 competing junior men amongst which the Chinese Taipei stood out again as much as the Classic Freestyle Slalom some days ago.

The battle got really hot in the Senior category, which saw the polish Klaudia Hartmanis reaching the highest position on the podium after competing with the japanese Mika Moritoki, the argentinian Julieta Balleto and the chinese taipei Su Rou Rong (TPE). The second semifinal was between Hartmanis, Moritki and Paula Royo Martinez who got the female podium. Finally, Italian got the better of the men competition, with Lorenzo Demuru standing out 24 contestants and climb the podium up. He also got the gold medal in the Conero Hero Battle - the second stage of the Inline freestyle international circuit - followed by the chinese Taipei Chou Po-Wei and the italian Lorenzo Guslandi.

Check here all the results