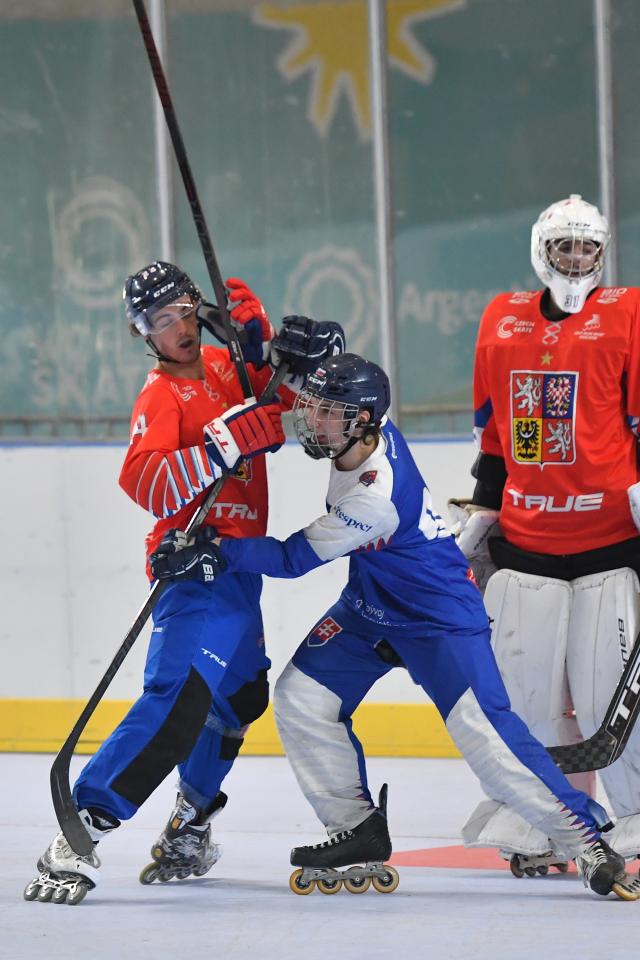 Crunch time at the World Skate Inline Hockey World Championships, and the teams across divisions enter their final two days.  With everything on the line, and the ultimate prize in Inline Hockey within reach, things could not be more exciting in Buenos Aires.

For Junior Women, the last days of group play are done, and the playoff schedule is set.  Because there is only one group in this division we launch straight into the semifinals tomorrow, so no time to rest on the road to the gold.  And a familiar story told many times at these games this week and last week, Namibia continued their march to the very top of the leagues, with a blinding 14-0 victory over the struggling Italians.  None other than African Star Christine Rottcher racking up no less than 8 of those, and cementing her place as a Hero of Namibia.  They maintained their unbeaten record into the semifinals, playing against Argentina, who could not hold back a resurgent Colombia, who beat them 3-6 in their game today.  Colombia will play the USA, who are the other dangerous team in this group.  They beat Brazil to take their place in the Semis, led by their points and goal leader for the tournament, Isabella Mardesich.  This league will burn bright and fast, so don’t miss any of the action tomorrow in the Semifinals.

In Senior Men, Quarter finals are already under way, and for two prestigious awards.  In the International Cup, Colombia pulled off the shock of the tournament against the mighty team from the great white north.  Team Canada have struggled to match form in the top leagues, and their competitors are sensing an opportunity.  Colombia did exactly that, and beat the Canadians 5-3 to go through to the semifinals tomorrow, playing Brazil.  Brazil managed to beat Japan in their QF match up in this cup competition 4-2 to secure their place in the semi with their near neighbours.  Canada had to play again to hold onto chances of revival, and they just did enough against Mexico, winning 4-3 and hanging on to a semifinal place v Switzerland on Saturday.  The Swiss did enough against Brazil to make that place and keep Helvetica's hopes alive.  Meanwhile, Uruguay felt another brutal 25 goal earthquake from the Germans, who face Ireland in their placing match tomorrow.  In the first two Quarter Finals for the Men's Gold medal, France did the seemingly impossible, and beat Chinese Taipei 5-2.  Up until this point they looked almost unbeatable, but this is the very pinnacle of Inline, and the French showed their pedigree in this expert display.  That leaves Taipei to battle for 5th vs Slovakia, but certainly they will have secured promotion to the top tier of inline, so Job well done Taipei.  In the other Quarter-final, the Italians' form was apparent, and they are quietly arriving into the semifinals with a win against Spain 4-2.  This sets up a mighty clash vs USA for the Azzurri, While Spain will contend against Argentina for the middle table prize.  In the other two QF matches, Czechia won the bohemian rhapsody v Slovakia 5-0.  This lands them in an all red, white and blue tricolour clash against France.

So at senior mens, the names you would have suspected have indeed arrived at the semifinals, despite the very best of new and old teams battling with their best to surpass these classic legends.  But experience and history can matter as much as skill and speed.  We can see this clearly as tomorrow we will know who will play for the final from Czechia v France, and USA v Italy.  Catch all the action as always right here with World Skate.

Photogallery of the day