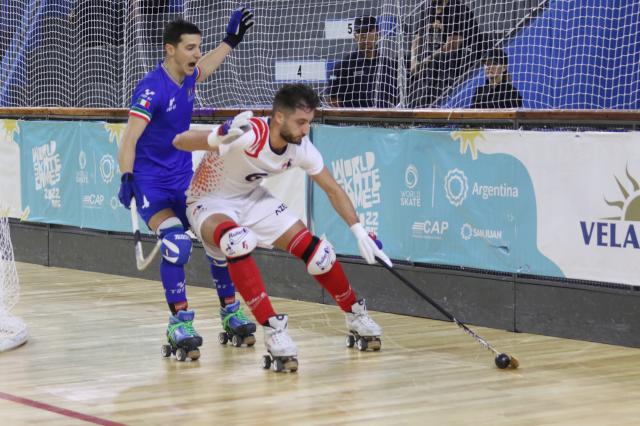 In the last day of the Group Stage, a tough, thrilling and with uncertainty right to the very end first game. This was how the match between Italy and France was fought, ending in a four-all draw (2-3 at half-time), with Italy's fourth goal coming almost a minute before the end of the match.

Italy scored first, signed by Gabriel Ambrosio, at minute 18. France managed to surprise from the beginning, with its rapid attack in order to reach the other side quickly in an attempt to dismantle Italy's marking. The French's speed was crucial in the course of the match, as it was an issue which the Azzurri struggled to solve.

To further complicate things for the Italians, all three goals they suffered in the first half came from medium and long-range shots. The first, from Roberto di Benedetto, the second from Carlo di Benedetto and the third from Remi Herman, from de middle of the rink.

The fourth French goal came early in the second half, at minute 23, by Carlo di Benedetto. The Italians tried to speed up and, a harsh infraction committed by Bruno Di Benedetto gives him the blue card Giulio Cocco scored the third for Italy.

In the meantime, both team’s fouls were piling up. Italy was the first to commit the tenth foul, but Rémi Herman was unable to score. A few seconds later it was France turn to give away its tenth foul, with Guilio Cocco unable to score this time.

France stood firm in defence, managing attacks with skill but the Italians slowly began to get back into the game, and the match last few minutes were among the most exciting we've seen.

Excessive pressure in the game's last minutes, resulted in a new foul piling, with both teams with 14 fouls. With 1'55 to go, Italy committed its 15th foul, but Carlo Di Benedetto was unable to score.  With just 1'17 before the end, Guilio Cocco leads the attack and managed to tie the game for Italy.

In the second match of the day, Spain beat Angola 1-5 (1-3 at half-time) in a tight match in which the Spanish only resolved the game in the last five minutes.

The first 25 minutes began with the two teams entering the Aldo Cantoni rink with an intense pace. Pau Bargallo gave Spain the lead at minute 2 and Angola quickly sought to tie the scoreboard and, just 24 seconds later, Martín Payero scored the 1-1.

Angola gained confidence with the tie and balanced the game until midway through the first half. With back-and-forth situations at both ends, the score remained tied until minute 17, after Spain recovered a ball and, on the counterattack Nil Roca scored the second.

Immediately Spain sought to widen the difference, and continued to put pressure on the African area, which paid off, when again Nil Roca managed to score the third for Spain.

In the second half, the match changed, bordering on boredom with Spain's goals only occurring in the closing five minutes: first by Ferrán Font and then by Marc Julia.

Next on the menu, Portugal won Chile 1-7 (1-3 at half-time) thus taking the first place in the Pool A.

The game started with some intensity, with Chile trying to reach the Portuguese goal, forcing Girão to perform his first save. In response, Portugal scored through Telmo Pinto, in a transition at the first touch, practically in the first minute.

Chile tried to play with more advanced lines, looking for the ball in the opponent's half, and Portugal insisted on the path to the Chilean goal, but without being able to score, until minute 16, when João Rodrigues scored the second.

Portugal was more competent collectively, while Chile was betting on individual initiatives. The third goal came from the stick of João Souto assisted by Henrique Magalhães, at minute 11. The first and only Chilean goal was scored by Felipe Marquez, in a first half in which Portugal wasted countless opportunities. In the second half, the dynamic of the game didn't change, and the goals kept coming for Portugal.

In the last game of the night, Argentina thrashed a fragile Mozambique team, by 0-13 (0-7 at half time).

Mozambique had no arguments to overcome an unbeaten Argentina in this group stage. From the first minutes of the game, the host team constructed a rout that only ended six seconds before the end, with the 13th goal. Ezequiel Mena was the player who scored the most goals for his team, four in total.

After a tie in the first game and a defeat in the second, Andorra got its first win against Austria, by 5-3. Brazil lost 4-7 to Colombia and Germany thrashed Austria 11-0. Switzerland was effective against Israel and won the match 8-1.

Mozambique and Germany, Chile and Colombia, will play the qualifying matches to define the teams that will play against Portugal and Argentina, in the quarter finals of the World Championship.

Day three of the Challenger's Championship began with the match between Uruguay and Egypt, with the former winning 9-4 at Marcelo Garcia.

In the second game, the USA were superior to New Zealand and won 1-8. Finally, in the last game, Mexico and South Africa tied 1-1.