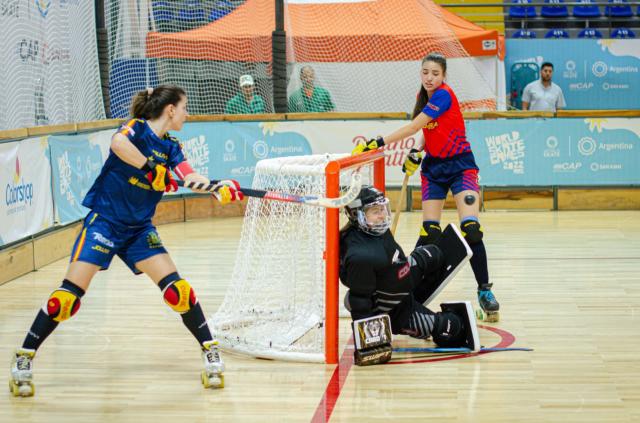 Italy semi-finalist after winning, this afternoon, the first game of the Women's World Championship, still at the UPCN Stadium, with the winning goal just as the game was finishing. The Italians beat Chile 2-1 (1-0 at half-time), thanks to their counterattack and the performance of their goalkeeper Veronica Caretta.

Although in the second half the Chilean team seemed stronger - especially after the tie - in the first half they lacked their collective game. Italy countered the Chileans' rise, still in the first half, and with two minutes remaining, Pamela Lapolla scored the first for her team.

The second half was different with more ball sharing by both teams. It was during this constant attack and counterattack that Chile tied it, through Maca Ramos. The next few minutes were intense with both teams pressing forward and with the goalkeepers being the stars of the match.

The finale was nerve-wracking, with a last-minute opportunity wasted by Chile and Italy scoring the winning goal with the clock almost at zero. Elena Tamiozzo was the scorer of Italy's winning goal.

Italy will play the semifinal against Spain, which will be played at Aldo Cantoni. Chile will play for the 5th to 8th places.

In the second game, and with no surprises, Portugal beat Germany by 0-5 (0-1 at half-time), and also stamped its passage to the semis, where will play against Argentina.

With this result, Portugal overcame the last World Championship classification (lost in the quarter finals) and, nine years later, is now in the semifinals of the competition.

The Portuguese team started the game with more ball possession, with the first scored at minute 23, by Marlene Sousa, assisted by Maria Sofia. In the following minutes, and until the end of the first half, Portugal created numerous chances while Germany tried to defend as best it could, and only didn't score due to the performance of the opposing goalkeeper, Annabell Pillenkamp.

The Germans gained some spirit, trying to create some danger in the Portuguese area. With a minute to the end of the first half, Ana Catarina saw the blue carded, but Cláudia Vicente closed the Portuguese goal well, preventing the opponent from tying the game.

In the second half, Portugal continued to apply pressure and speed in the game and Ana Catarina scored the second, at minute 14. A penalty for the Portuguese team followed, scored by Raquel Santos (0-3) and, in the same minute, Inês Severino scored the 0-4.

With 30 seconds remaining, Germany saw a blue card and Inês Severino scored the fifth and last for Portugal.

In the third match of the quarterfinals, Spain thrashed Colombia 0-9 (0-3 at half-time) and is the third team through to the semis.

The Spanish team had no major difficulties and early on imposed its hockey skills, with Marta Piquero opening the scoreboard, at minute 17. Sara Roces and Mariona Colomer scored two more goals and gave the 0-3 lead at half-time.

In the second period, the game continued to be completely dominated by the Spanish, who scored the fourth goal in the first minute. Without Colombia being able to impose itself in the game, Spain didn't slow down and scored five more goals, thus ensuring its presence in tomorrow's semi-final, where will be playing against Italy.

The host team beat, this afternoon, without any difficulty, 10-1 (8-0 at half-time) the French team and, as expected, and is in the top four teams of the championship, where it will face Portugal, in the semifinals.

The first half of this last game of the day, belonged all to Argentina, who scored in the first two minutes of the game, by Julieta Fernández (who was her team's top scorer with four goals). At half-time, Argentina led by eight goals.

In the second half, the Argentineans continued to dominate and scored twice. Celia Gohet was the scorer of France's sole goal.