WSG Argentina: Rink Hockey, the semifinals are France-Portugal and Argentina-Italy 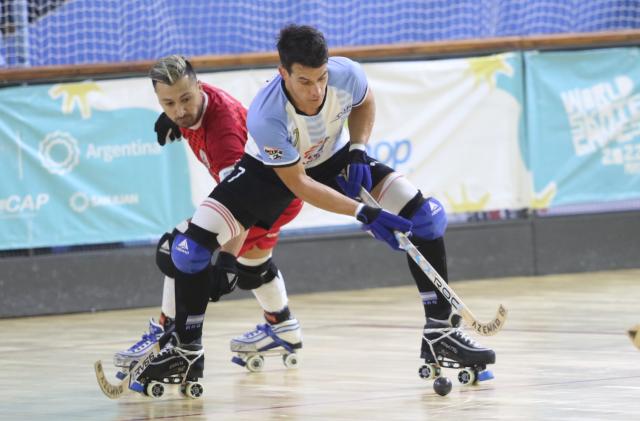 In the first match of the day, Italy struggled at the hands of Angola to get their much-desired place in the semi-finals after beating Angola 4-5 (2-1 at half time) in what was a tremendous rink hockey game, which was thrilling until the last second.

The Italians had a dizzying start, with quick moves and attempts to open the opposing defence and managed to open the score with Federico Ambrosio unmarked to strike.

From then on, Angola was at its best: firstly, by managing time to slow down the opponents. Then, defending in their own zone covering the width of the pitch. Finally, resorting on the counterattack to surprise the Italians.

The first half started with a surprise. The beginning of a balanced match ended up tipping the offensive difference in Angola's favour who managed to win in the first 25 minutes by a 2-1 score.

Italy scored first, at minute 5, through Federico Ambrosio, with Angola tying shortly after, by João Pinto, which allowed the Angolans to balance their actions on the rink. Humberto Mendes Da Silva, in an individual move, scored the second for Angola. Italy pressured in the last minutes to tie before the breaktime, but in vain.

In the second half, Angola continued the path of the first, and scored the third goal by Anderson Silva, at minute 22 and the fourth, by João Pinto, at minute 12.

From this point on, Italy began to build the turnaround, adjusting its marking and the answer came at minute 14, when Andrea Malagoli reduced the 3-4. About three minutes later, Cocco scored the tie goal, giving the Italians a boost. Cocco again, gave the victory to the Italians, through a direct free shot, five minutes before the end of the match. The Italians will play the semi-final against Argentina-Chile.

And, on the second match, the first big surprise of this competition: France eliminated Spain on the penalties, in a dramatic hockey game, after the first 50 minutes ended up with a 3-3 tie, in the extra time each team tied again (4-4), and France won 0-1 in the penalties.

Almost a year ago, Spain eliminated France in the final of the European Championship. Today, the French revolution had its "revenge" and eliminated the Cabestany''s team, booking its place in tomorrow's semi-final, where will be playing against Portugal.

The tie on the scoreboard reflected what was happening on the rink, with neither team clearly in control. Before breaktime, the French team scored the 1-2, through Roberto Benedetto, following a penalty scored by the same player.

Just at minute 23 into the second half again, Carlo Di Benedetto scored the third, with a powerful shot from midfield. From this point onwards, Spain tried its best to get to the other goal, while France closed in on its zone. After numerous attempts, the Spanish team reduced the deficit through Pau Bargalló, at minute18 and, with one minute to go, Ferrant Font tied the match.

In the first half of the extra time, the teams didn't take many chances, leaving everything to the last five minutes, when they tied again: first France, through Roberto Di Benedetto, and then Spain, through Pau Bargalló. In the penalties, France was more effective and scored one, while Spain missed all of them.

Third game, with an expected victory for Portugal over Germany, by 10-1 (2-0 at half-time), also conquering its place in the semis, where will play against France.

The match was completely dominated by the Portuguese team, in a first half in which the only reason why there weren't more goals was due to the fact that the Germans played, almost most of the time, in a defensive block, creating difficulties for Portugal in scoring.

In an individual action, Henrique Magalhaes created space for the shot and scored the first of his team, at minute 17. Portugal continued to put pressure, forcing the opposing goalkeeper to shine in the match. At minute 7, Gonçalo Alves scored a penalty shot, setting the score at half-time.

In the second half, the game didn't change in what concerns the Portuguese predominance and the German defence. But the Portuguese pressure did result, and the goals started coming, ending with an expressive 10-1 final score.

In the last match to decide the semifinals, Argentina beat Chile 6-2 (1-1 at half-time) after being down 1-2 and is the last team to qualify, where will play against Italy.

To the astonishment of many, the Chilean national team surprised with its approach which, was on equal terms with Argentina, this way creating danger for the opposing team.

Argentina had to suffer to end up unleashing a great cheer at the Aldo Cantoni, as Alvarez and Nicolía were making Chile’s goalkeeper the star of the match, when Nicolás Fernández scored, at minute 15. Just over a minute later, Ezequiel Mena recovered a ball and assisted Alvarez for Argentina's tie, setting the score at the end of the first half.

The second half began much similar, although this time, it was before 4 minutes, when Chile took once again the lead on the scoreboard, thanks to a long-range shot by Diego Rojas.

Argentina managed to tie again, at minute 17, with another goal from Alvarez, who was assisted by Ordoñez. In three and a half minutes, a goal from Mena and two from Facundo Bridge gave the lead for the host team, at a time that Chile physically, no longer had the energy to turn the score.

Tomorrow the quarterfinals after the promotion's matches concluded with the victory of Germany and Chile. Mozambique and Colombia will play for the Intercontinental Championship

In the Challenger's Championship opening match, Egypt against Mexico. In a very tight first half, Egypt quickly took the lead by 2-0. Mexico tried to recover and managed to reduce to 2 to 1. In the second half, Egypt was able to close the game with the 3-1 score, in the last two minutes of the game.

In the second game, the USA faced Uruguay who took the lead in less than a minute of playing. In the second half the USA managed to turn the result in their favour to make it 3-2.

The last match of the day was between South Africa and New Zealand, which South Africa conquering its first victory in the competition, by 4-5.