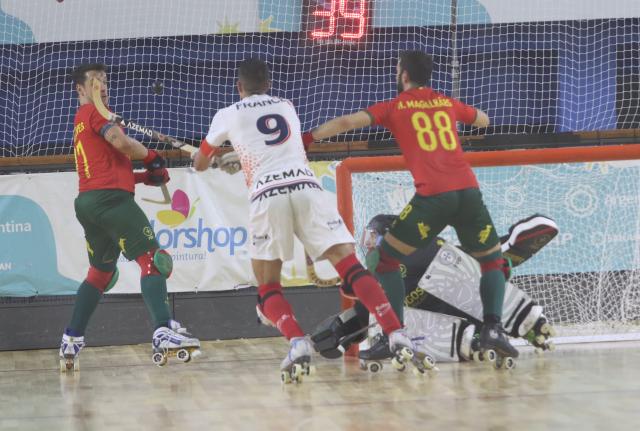 In the first semifinal of the Men's World Championship, Portugal defeated France with a 0-5 score, (0-1 at half-time), and was the first team to book its place in Sunday's final.

Three years later, the Portuguese national team will look to renew its world champion title against Argentina and the host team, will try to "avenge" Barcelona's final, where it lost to the Portuguese, on the penalties.

It was a game of patience in which Portugal faced a motivated French team, after having eliminated Spain in the quarter finals. The match began at a strong pace, with the Portuguese well organised at the back and trying to get out quickly to the organised attack. On the other hand, France tried to control the opponent's speed, trying not to enter in the speed imposed by Portugal.

The Portuguese team continued to control the game, secure on their defence, and the few times France looked for goal, Girão was always on the alert. It became a game of great patience, with France betting on outside balls and Portugal trying to unbalance the French.

Portugal's goal was scored just 4'30 before breaktime, through a powerful shot, "from the middle of the street", by Rafa, which gave his team the advantage on the scoreboard.

In the second half, Portugal continued confident, managing the advantage on the scoreboard, and defending faultlessly.

With four minutes remaining, Roberto di Benedetto saw the blue card. Gonçalo Alves failed to score but, seconds later, Hélder Nunes scored the 2-0, to the despair of the French and the joy of the Portuguese.

With just 50 seconds to the end, when France was playing with five field players, Henrique Magalhães scored the third and, with 34 seconds left on the clock, Hélder Nunes "killed" the game with the fourth.

Argentina is the other finalist of the competition, after beating a fierce Italy, in the semifinal, by 4-1 (2-0 at half-time), in an extraordinary atmosphere and a Cantoni singing in chorus.

The Italians were on the attack but were unable to finish, sometimes unluckily, other times because of the Argentinian goalkeeper, Conti Acevedo. Playing at home, on another night with a sold-out Aldo Cantoni, Argentina tried to take the lead in what was a passionate, exciting game, worthy of a semifinal.

It was a match that had everything: the first half was frictional, with both teams trying to impose their superiority from the start and imposing speed in their movements and fast rotation of the ball.

Nolito Romero was the hero of the first half, scoring two goals before breaktime: the first, with about three minutes remaining and the second, only 5 seconds before the buzzer.

In the second half, Argentina managed to control the game pace better, getting down the flanks to take advantage of the spaces that the Italians were leaving trying to narrow the score. And as early as the minute 23, Lucas Ordoñez scored the third.

With the score in its favour, Argentina was able to control the match and create new options to close the game.

Italy fought until the end, always believing that could score, and did it, with just 2'40 to go through Giulio Cocco. But it was too late in the game for the Italians to get back into the game. With 30 seconds to end, Nicolía wrapped up the result, scoring the fourth and final goal for the Argentineans, who will now face Portugal, in the Sunday’s final.

Now in the running for the lower places in the ranking, Spain trashed Germany, with a 9-0 result, and will try to win the 5th place, against Angola, who won Chile by 4-8. Germany and Chile will now fight for the 7th place.

Mozambique beat Israel 12-5 (9-1 at half time) and will play in the semi-final against Switzerland, who beat Austria 1-3.

The second semifinal will be between Andorra and Colombia, who beat Brazil and Australia 4-0 and 2-7, respectively.

Places 5th to 8th will be played between Israel-Austria and Brazil-Australia.

The USA beat Mexico 1-9 and will play the final against Uruguay, who thrashed New Zealand 13-3. In the last match of the day, Egypt beat South Africa by the minimum margin of 3-2.