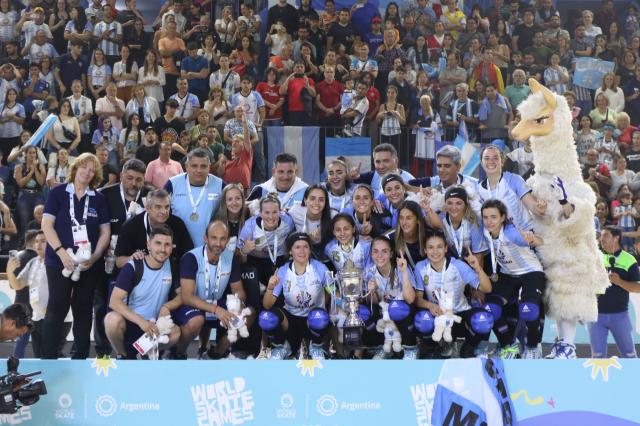 What a night for Argentina and for women's rink hockey! The host team didn't give the Spanish a chance and was able to avenge the 2019 final, beating Spain 3-0 (2-0 at half-time). This is the sixth time that Argentina’s female team wins the world champion title and the first time in the iconic Aldo Cantoni.

It was a match in which the Argentineans were able to manage the changes on the rink, starting the first minutes with high pressure in order to difficult Spain's exits when in possession of the ball.

Argentina's victory was built very early in the game, at minute 22, by Julieta Fernández. After the goal, the host team slowed down a bit and Spain tried to tie the game with its usual high pressure and trying to give more depth to its attack, forcing the goalkeeper, Annabella Flores to shine, stopping the Spanish attempts.

Argentina's quick exits through the flanks resulted in the second goal, again from Julieta Fernández, who shot at the far post. With the two-goal deficit, Spain tried to accelerate, but Argentina's defensive block was well coordinated, and the teams went into the breaktime with the 2-0 score.

In the second half, Spain kept trying to impose speed to the attack, while the Argentineans played with time management, to slow down the Spanish speed. Argentina's third goal emerged in a classic 2-on-1 counterattack, finished by Adriana Soto, at minute 15, with the final 3-0 result.

Overall, Argentina was stronger and showcased better arguments, supported by the sixth player: the more than 7,000 people who attended the Cantoni.

Portugal began pressing and had the opportunity to get the lead, first with a penalty at minute 18, due to a foul over Marlene Sousa in the Italian area and after, for a blue card shown to the Squadra Azzurra, both unsuccessfully for the Portuguese team.

The ascendancy continued to be Portuguese, but Italy closed well in its area. Portugal kept pressing and the goal eventually came, near two minutes to the end of the first half, by Inês Severino, setting the result at half-time.

In the second half, Italy entered a bit more determined with Erika Ghirardello leading the attack, but the game hardly changed in comparison with the first half, with Portugal taking control again. At minute 13, another direct shot for Portugal with Inês Severino getting the goalkeeper out of the way and scoring the second for Portugal. At minute 9, again Inês Severino, in a powerful shot, scored the third of her personal account and of the match, closing the result that gave the bronze medal to the Portuguese.

The game started smoothly with France in the defence, preventing Chile from entering the area, thanks also to its goalkeeper's exhibition. The Chilean team tried so hard that eventually scored, first at minute 7, by Beatriz Gaete and, one minute before the end of the first half, by Francisca Donoso.

The second half was more exciting than the first. At minute 15, Cata Flores increased the lead to the third goal. The French team scored nine minutes later, by Cyrielle Lagroye, to make it 1-3, a result that was kept until 40 seconds to the end, when Cata Flores scored again, closing the score for Chile, and the participation in the competition with the 5th place. France added the last goal, from a penalty shot, with the final score at 2-4, placing the team in 6th place.

In the first game of the day Colombia achieved seventh place, after beating Germany on the penalties. The Germans started very well during the first ten minutes, with more ball possession and attacks. The goal arrived at minute 17, by Annika Zech. Colombia tied, at minute 19, in a counterattack finished by Manuela Arias. From this moment on, Germany felt the effects of the goal and broke down, while Colombia livened up. The first half ended with a draw, a fair result for what was seen in the last 10 minutes.

The second half opened with a direct shot in favour of the Colombians, with the captain Sofia Ramirez giving her team the lead. Germany tied it, again through Annika Zech, at minute 19. With no more goals until the end, the teams remained tied and only in the penalty shootout, Colombia managed to win by scoring one, against zero for Germany, which thus ended up in the 8th place.

Switzerland was crowned the Women Intercontinental Championship champion, after thrashing Mexico 0-20 in its final match (0-11 at half-time), achieving a total of 18 points in the competition, with six wins in six matches.

Brazil finished second place and the bronze medal was for Australia.

It took 60 minutes and a 17 penalty round for Mozambique to defeat Switzerland and reach the Intercontinental Championship final!

The game first 50 minutes ended with a a six-all draw. In the extra time, neither team scored, so they had to go to the penalty shootout, where Switzerland scored one, while Mozambique scored two, signed by Mario Rodriguez and Bruno Pinto.

The Mozambican team will play the final tomorrow against Colombia, who beat Andorra team 0-1, while Switzerland will compete for the bronze medal against Andorra.

Israel lost with Austria, by 2-8 and will now fight for the 7th place against Australia, who lost with Brazil, by 3-5. Running for the fifth place, tomorrow, will be Austria and Brazil.