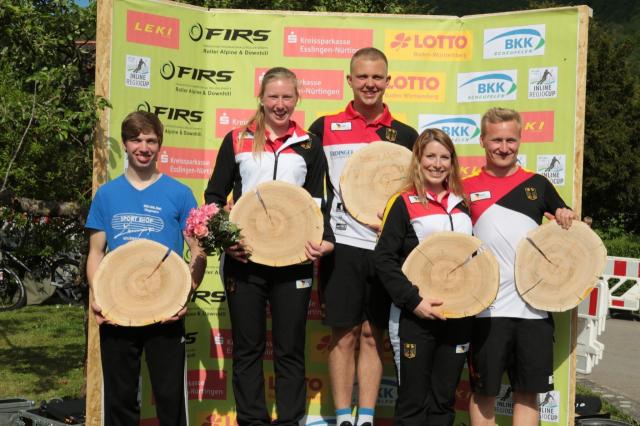 The international racing-series started again. This year the first worldcup was in Unterlenning at 21st May. The day before was a worldranking race in the same location. The weather was really good. Perfect conditions for a worldcup. The track was located in the middle of a settlement. Starting with a quite strong slope, overall the track had a gradient of 9 %. A few gates before the finish was a tricky constellation of poles, because the street made a 90 degree turn to the right. But most of the contestants did a really good job passing those gates.

In the women´s category Claudia Wittmann (GER) won the race. Ann Krystina Wanzke (GER) took second place with only the tenth of a second behind Wittmann. Manuela Schmohl (GER) got third. After the first run Marina Seitz (GER) was third, but sadly, she crashed in the second run.
In the men's category Sven Ortel (GER) wass ranked on the first place. After the first run Joerg Bertsch (GER) and Moritz Doms (GER) had the same time, what made the second run a head on head race between both of them. With a small lead Bertsch took the second place, followed by Doms who got third.
The next worldcup will be in Warsaw (POL) on 11th of June.
We are looking forward to an exiting new season.