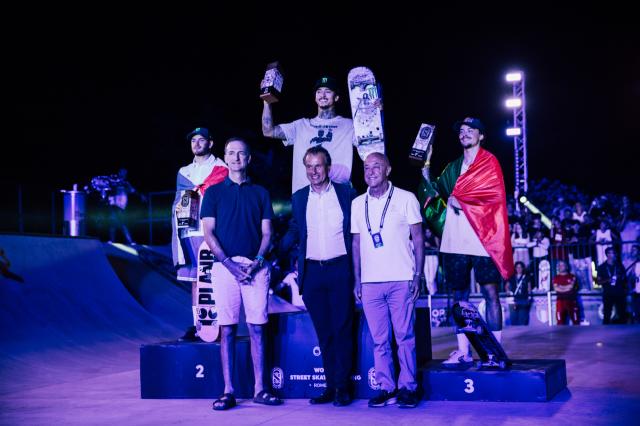 A full week of sunshine and skateboarding in the eternal city of Rome climaxed in a Sunday night showdown pumping with energy and euphoria.

From in excess of 200 entrants last Monday to the final six stood on the podiums on the streetcourse of World Street Skateboarding Rome just moments ago on a balmy Italian July evening, the starting gun has been well and truly fired on skateboarding’s road to Paris 2024.

With the 8 finalists in both the Men’s and Women’s divisions brought together for one last showdown the stakes could not have been higher and nothing was left in reserve as the skateboarding battles went right down to the wire.

With 5 of the final 8 positions in the Women’s contest being held by the unstoppable Japanese contingent it was likely if not inevitable that Japan would be represented on the podium but in the end they delivered a clean sweep; all top three positions went to the new dominant nation in competitive female skateboarding this time around.

The Men’s final was a rollercoaster, with just a single American, no Brazilians and two Argentinian and two French finalists signalling the shifting tides of the male competition circuit. The new format carrying a single run score through into the total meant the Best Trick was an absolute dogfight and the crowd were at fever pitch throughout.

For more in-depth analysis of the entire event and all the photography and video recaps you could possibly want, join us on skateboarding.worldskate.org for insight and analysis on the significance and ramifications of World Street Skateboarding Rome on the road to Paris 2024!