WRG 2019 - FREESTYLE - One day of records for Speed Slalom 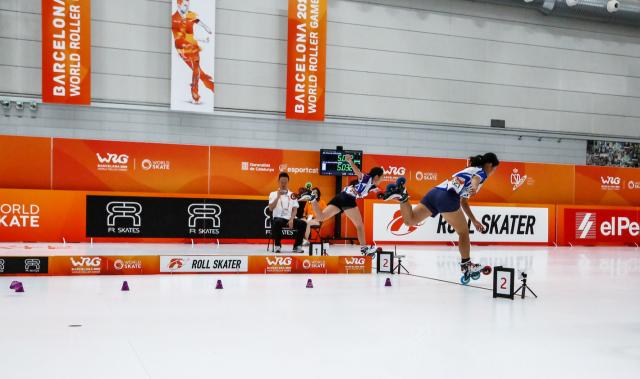 The third day of competition at the WRG is dedicated to Speed Slalom. More than 100 athletes challenged each other in the qualification rounds to get a ticket to the finals: only the first 16 athletes in Junior categories and Senior men qualify while the first 8 Senior women will have a chance in the finals.

The fastest competitors in the Junior women category come from Chinese Taipei, Iran and Italy: these athletes set times between 4,4 and 4,6 seconds, approaching the current world record of 4,424 for free start.

The eighths of final see the defeat of Russia and Spain, as their athletes perform slower or not enough accurate runs.

During the quarter finals, these three countries saw their athletes fight against each other, reducing by half the chances of going forward in the competition for each national team.

In the semifinals, the current world champion Ting Yu En (TPE) met Matilde Arosio (ITA). Both performed very fast runs with few penalties but Matilde Arosio stresses out and kicks too many cones in the second run. She will be fighting for the bronze medal, while Ting Yu En goes on in her run for the gold.

In the second semifinal, Romina Esfahani from Iran met Liu Chiao-Hsi from Chinese Taipei, who got the bronze medal at the previous edition of the WRG in 2017. Liu Chiao-Hsi performs the fastest KO run ever as she stops the chronometer at 5,069 seconds and not also wins a pass to the final but also marks the world record in KO system.

We find Matilde Arosio (ITA) versus Romina Esfahani (IRI) in the consolation final. Despite showing a great mental strength throughout the whole competition, Matilde in this KO stresses out: too many penalties push her out of the podium. Romina Esfahani gets the first medal for Iran in this world championship.

The big final is a fight against Chinese Taipei athletes: Ting Yu En, world champion 2018, challenges Liu Chiao-Hsi, bronze medal at the WRG in 2017. Their runs are almost identical and as a consequence in turn, a small time advantage in each run leads them to the third run. The result of the play off confirms Ting Yu En’s supremacy as her teammate has too many penalties in their last run.

As well as in the Junior women category, the qualified skaters are 16 and include athletes from Italy, Chinese Taipei, Russia, France, Thailand, Spain and Hong Kong. After the eighths of final, the remaining countries are Chinese Taipei, France, Italy and China. These national teams have always been the best in speed slalom but the Asian rise is unstoppable and the Europeans are eliminated in the quarter finals.

The Asian semifinals show very thrilling challenges: Cheng Yu-Hsiang wins against Cheng Jui-Lun with a time advantage of only 9 cents of seconds, while Zeng Yi (CHN) is faster in both runs then Chou Po Wei (TPE).

The gold medal is given to Cheng Yu-Hsiang (TPE), who gets very close to the world record of KO, and wins the competition with 0,006 seconds of time advantage to Zeng Yi (CHN), who gets the silver medal.

Senior women is the only category in this competition with less than 20 participants and for this reason, only 8 tickets to the finals are available to the athletes. Also for this category, the main countries going to the finals are Chinese Taipei, Italy, Iran, France and Spain.

In the semifinals, the challenges are between Italy and Chinese Taipei.

Chen Pei-Yi (TPE), world champion 2017, beats Elisa Paoli (ITA), who does two false starts in the first run. The second and last run see both skaters kicking one cone but unfortunately for the Italian Elisa Paoli, the Asian skater Chen Pei-Yi has a little time advantage that allows here to compete for gold in the big final.

Cristina Rotunno (ITA) meets Lo Pei-Yu (TPE), bronze medal at WRG 2017. Cristina’s accuracy and great experience are not enough to stop the Asian skater, who is faster and goes to the big final.

The Chinese Taipei challenge for gold between Chen Pei-Yi and Lo Pei-Yu shows the audience super fast and clean runs, with Chen Pei-Yi bringing back her crown and becoming again the queen of Speed Slalom.

Senior men category is today the category of records as Lesani Reza (IRI) and Yu Jun Yan (CHN) beat the free start and KO world championship records respectively. Iran amazed the audience getting the first three tickets to the finals, followed by China, Italy, Chinese Taipei, France and Austria. In this phase, Lesani Reza stunned both athletes and audience with his first run setting the free start world record at 4,118 seconds.

The eighths of final see many top level skaters leave the competition due to time advantages of their opponents. Iran, Italy, China and Chinese Taipei skaters continue their competition and amaze the audience with accurate, fast and thrilling challenges.

The best show starts with the semifinals: Lesani Reza (IRI) and Yu Jun Yan (CHN) set and beat two records in a row.

In their first semifinal, Lesani Reza sets the new KO world record at 4,717 and wins the first run. In the second run, both skaters stop the chronometers at the exact same time, setting a second world record: this is the first time that something similar happens but in the KO procedure this is considered as an invalid run and it is therefore not kept into consideration. In the following run, Yu Jun Yan beats Lesani Reza’s new world record, setting it at 4,699 seconds. The last run is won by Yu Jun Yan again, who wins the semifinal and runs for gold.

Lesani Reza will then compete in the consolation final against Savio Brivio (ITA), who defeats Savari Jamalouei Amir Mohammad (IRI) and gets the chance to win the bronze medal.

In the finals, Savio Brivio lacks of accuracy and performs two runs with too many cones kicked, letting Lesani Reza easily win. Lesani Reza finishes third and Savio Brivio fourth.
Yu Jun Yan meets Savari Jamalouei Amir Mohammad: the competition is very exciting. The first run is won by the Iranian skater with just 12 cents of advantage but a penalty in the second run result in a tie with the Chinese skater. At the play off, Yu Jun Yan repeats her performance from last year and consolidates his dominance in the speed slalom scene.