The Men’s competition begins with a dramatic result for the host nation! 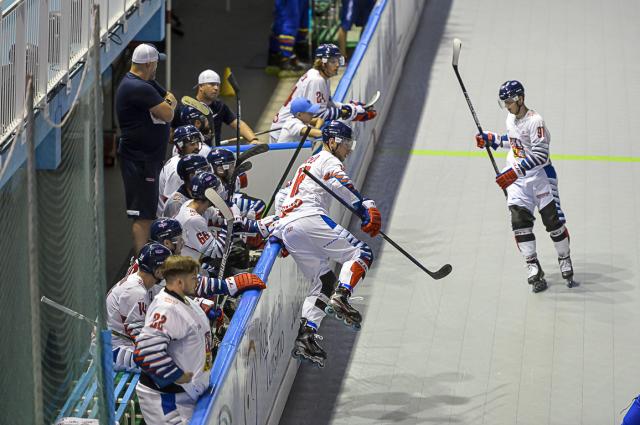 The sun is still shining brightly in the heart of Italy, where the Senior Mens competition at the World Skate Inline Hockey Championships has begun in style.

The first matches across all 4 groups saw teams opening their account in the race for gold. Early in the morning saw Latvia overcome Poland, and Namibia beat India to take the first points in their respective groups. Followed by victories for Argentina over Germany, and Mexico narrowly beating Chinese Taipei. This was just a taster before the big guns of Inline took the stage to set out their stall.

Canada stumbled early in their match vs Slovakia, before some stunning work by the Canadian talisman Thomas Woods settled the nerves and set the scene for a confident 6-3 victory. Then the team everyone fears to meet from the Czech Republic appeared against Columbia, who played valiantly and skilfully. Ultimately, the vast experience from the Czechs became a task too great to overcome for the South American side as they failed to score, but maybe satisfied to only concede 4.

Then in a dramatic and tense match between perennial sporting rivals Italy and France, the team from the host nation displayed utter brilliance and exceptional speed in overcoming their neighbours, who are hotly tipped as one of the favourites for the gold. Drama and excitement throughout the entire game persisted, but the Italians were determined to delight their home fans in the stadium and live on national TV in Italy, taking their first win 4-1.

The final Match of the day saw Spain prevail over the well organised and determined Swiss team. It was a very close match throughout, but towards the end the noticeable speed and manoeuvrability advantage began to tell, and as fatigue from chasing the puck set in, the Spanish sealed their fate, winning by 5-1. If day 1 is anything to go by, then we are in for a real treat in these championships. Matches across all groups today continue. Results so far include wins for Spain over Switzerland 5-1, and Namibia over Argentina 1-0. Every game is important in all the pools, as winners from pool C and D will play the last place from pool A and B for a chance to remain in the playoffs and increase their standing in the world ranking.